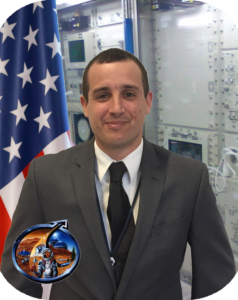 During Crew 184’s mission my primary function will be coordinating activities between our crew and our ground team, ensuring safe and successful completion of all mission objectives.  I will additionally be serving as Crew Astronomer and participating in our time delay operations experiment via executing ground tasks delivered under varying information transfer methods.

I currently serve as the ECLSS Atmosphere Lead for the Dreamchaser Commercial Spacecraft.  My job consists of coordinating the design, test and build of all systems responsible for maintaining the internal atmosphere of the Dreamchaser Spacecraft suitable for ISS crew, live animals, and cargo.  This includes functions like thermal control, CO2 and other contaminant control, air ventilation, atmospheric sensing, and other functions necessary for replicating the Earth atmosphere on board a pressurized spacecraft.  Before joining the Dreamchaser program I worked for NASA supporting the International Space Station and Commercial Crew Program as an ECLSS / TCS Flight Controller and Engineering Manager.

Outside of my work in the space industry I have been active in space and general STEM outreach efforts to the general public.  This has included speaking for TEDx, Citizen Schools, organizing Yuri’s Night, and being a member of the NASA Speaker’s Bureau.  In my personal time you can either find me on the water kayaking, sailing or body boarding or in the mountains hiking. 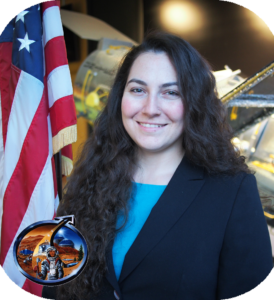 During crew 184’s mission, I will be working under the Commander providing leadership to ensure the safety of the crew and habitat, logistics of extravehicular activity (EVA), and overall mission success. Additionally, I will be completing general crew tasks, such as EVA’s, conducting experiments, and completing daily housekeeping items.

I currently support NASA Goddard as a systems engineer contracted onto two projects: the next generation of weather satellites, the Joint Polar Satellite System, and a mission demonstrating optical communication, the Laser Communication Relay Demonstration. Before joining Goddard, I supported the agency in a variety of capacities, such as modeling the mantle plumes of Venus at NASA/Caltech’s Jet Propulsion Laboratory, characterizing transistors at the NASA Ames Research Center, and developing technology roadmaps at the NASA Johnson Space Center. Outside of my work with NASA, I also contribute to the space industry by providing leadership as the Small Satellite Project Group Co-Lead under the Space Generation Advisory Council. I hold a  Master’s in Space Studies from the International Space University in Strasbourg, France and a Bachelor’s from the College of Idaho. In my free time, I enjoy skiing, dancing, games, and puzzles. 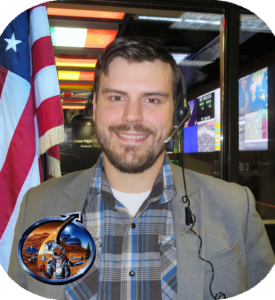 During Crew 184’s mission, my primary role will be that of the Crew Engineer, ensuring successful overall functionality of the Habitat and will also provide necessary maintenance during my two-week stay. I also will serve as a secondary Crew Astronomer and GreenHab Officer in order to support related science. A couple major experiments I will be participating will be the time delay operations experiment via executing ground tasks delivered under varying information transfer methods, and a sleep fatigue experiment, measuring the physiological and psychological stresses the human body will go through by shifting their sleep schedules every night on the time increment of 40 minutes.

My current career outside of the Mars Society is that of an International Space Station (ISS) Flight Controller, stationed at the Payload Operations and Integration Center(POIC) which is located at NASA Marshall Space Flight Center in Huntsville, Alabama, U.S.A. My certification is that of an Operations Controller (OC) which oversees the successful execution of science experiments on ISS, Leads in Payload and system anomaly resolution, and is the “first line of defense” for crew safety. I also hold a second flight controller certification as a Timeline Change Officer (TCO) which is the POIC Real-Time Planner position.

Outside of work, my hobbies include, running, hiking, traveling, and playing video games. 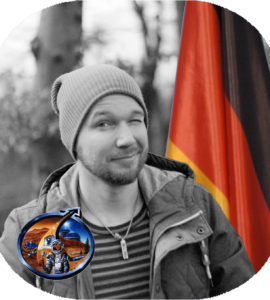 I am from Hamburg, Germany, where I am based as television journalist, photographer and filmmaker. For television, I mainly work abroad; one of my clients is Europe’s biggest science tv show called Nano on 3Sat (a tv station for Austria, Germany and Switzerland). For this show I have been filming on a polar station in Svalbard and digging out dinosaur bones with paleontologists in Canada. I have always been fascinated by space and I am very curious about the tales we will be creating during our stay at MDRS. 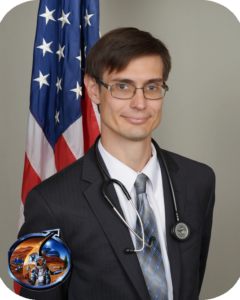 During crew 184’s mission, I will be working to ensure the health and safety of the crew. I will be conducting three research projects in addition to my medical duties on fatigue/sleep, anesthesia, and exercise. I am currently the chief medical scientist at my family company in San Diego. We have published multiple studies in highly regarded peer reviewed medical journals.

I graduated from Saint George’s University School of Medicine and completed my rotations in Queens, New York and the United Kingdom. I also have received my “Diploma of Higher Education in Medical Science” University Northumbria in Newcastle, England. While in school, I became interested in aerospace medicine and went through the introduction course at the University of Texas Medical Branch at Galveston. After medical school I completed the Space Medicine Clerkship at Johnson Space Center Houston, Texas. I am a current member of the Aerospace Medicine Association. I completed a research project in 2015 onboard a parabolic flight involving mechanical Cardiopulmonary resuscitation (CPR) compressions and inhalational anesthesia.

In my free time, I teach driving to international students, fellowship with Christians, and perform many high adventure outdoor activities. 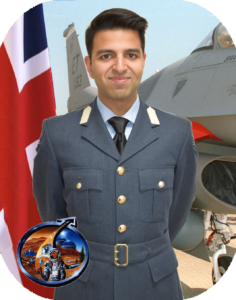 During Crew 184’s mission to MDRS, I will be leading most of the scientific research experiments that will be taking place including a psychological study on crew wellbeing, trialling a geological methodology for selecting Martian landing sites, studies using wearable technologies for EVA’s, and more. Additionally, I will be responsible for outreach activities whilst on base.

I am currently a PhD student at the University of Oxford researching the high strain rate properties of soft materials supporting a US Air Force project. After graduating, my ambition is to help in getting the first humans to Mars, or perhaps even be amongst the first to go! Outside of my research, I contribute to the student community in various representative committees, act as the UK National Point of Contact for Space Generation Advisory Council, and am a Reservist in the Royal Air Force.