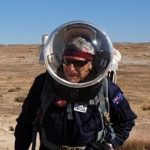 Andrew Wheeler – Crew Commander, Science Officer
As an exploration geologist since the early 1980s, a considerable amount of time has been spent in large and small exploration camps in regional and remote locations, including deserts. A lifelong interest in astrogeology received a major boost with the personal visit in 1987 to our exploration office in Perth by Gene and Carolyn Shoemaker in their quest for ‘unusual circular features’ that might be associated with asteroid impacts. Aware of the Mars Society since it’s inception, the late 1990s coincided with a surge in remotely sensed data being returned from Mars. Introductions to Planetary Scientists followed and turned the lifelong interest into real research opportunites examining Martian dune systems and, of late, Martian gully formation. 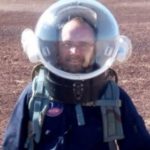 Guy Murphy – Greenhab Officer, Journalist
Guy first visited the MDRS in 2003 as part of Expedition One. His long-standing interest in Mars was initially fired by reading science fiction, and the Mars Pathfinder landing in 1998. He was a co-founder of the Mars Society Australia in 1998. He was its founding President from 2001 until 2005, and has been a society director ever since. Guy has also participated in scientific expeditions to Mars-like environments in outback South Australia and spoken at Mars conferences in Australia, Europe and North America. His interests in Australian history and Mars share the themes of frontier exploration and human settlement. Guy has also coauthored a number of papers examining the heritage management of space artefacts. He is the author of Mars: A Survival Guide, published by Harper Collins Australia (2010). 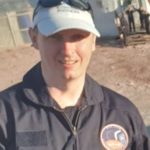 Dr Shane Usher – Crew Engineer
Dr Shane Usher is a Research Fellow in the Department of Chemical Engineering at The University of Melbourne.  He has expertise in the flow and dewatering of mineral slurries and wastewater sludges.  Shane has been inspired by recent space launch developments and is seeking to help enable a sustained human presence in outer space, our moon, Mars and beyond.  Towards this goal, he has commenced research to deal with the physical hazards of long term space missions, with particular focus on microgravity, radiation and vacuum pressures.  He is a candidate for SIRIUS-20, an 8-month analogue space mission in Moscow at the Institute of Biomedical Problems in 2020, where he plans to investigate the impact of ‘rowing in space’ to limit loss of bone density and muscle mass. 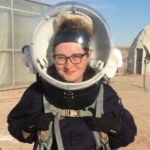 Jennifer Lane – Crew Researcher (Architecture)
Jennifer Lane is a doctoral student at Curtin University, Perth. Her PhD in Interior Architecture is aiming to understand how habitats on Mars can be designed in a way that contributes to the psychological wellbeing of the astronauts will one day inhabit them. During Expedition Boomerang Jennifer will be conducting a site analysis on the station and identifying areas that could be designed in a more human-centric way. Jennifer will also be undertaking a behavioural study of her crewmates to see how they interact with their environment. This data will be coupled with a survey and interviews from others who have occupied Mars Simulations to understand how the design of a Mars habitat could contribute to, or mitigate stress. 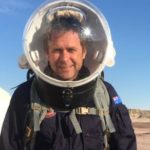 Steve Whitfield – Medical Officer
Steve Whitfield is a lecturer at Griffith University School of Medicine (paramedicine) with research interests in remote, polar and space medicine. Steve is also a keen geographer and writer with experience in providing healthcare in remote and extreme environments that include humanitarian operations,high altitude expedition medicine, flight and retrieval medicine. Steve’s workhas taken him to the Himalayas, Pacific Islands, Central Asia, the Middle Eastand the Arctic. During Expedition Boomerang Steve will be conducting an observational study of the capability of health care providers working in remote, extreme and confined environments. These findings will be supported through data gathered through the use of wearable technology that will capture the crew’s sleep patterns, fatigue management, and physiological wellbeing. 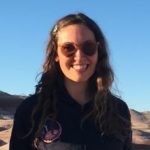 Larissa Wilson – Crew Researcher
Larissa Wilson is a mechanical engineering student in her final professional year at the University of Canterbury. She plans to specialise in acoustics engineering after the completion of the degree and is excited to apply her knowledge in this area to the experience at the MDRS. Larissa has been interested in space travel since she was a small child and will assist the other crew members in any of their fields of research so that she can increase her understanding of many aspects of human exploration of Mars.
Loading Comments...