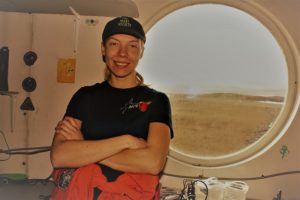 Even though Mars is populated by robots, yet it needs the most efficient and versatile tool for the exploration – a human. To learn how to live on another planet not necessary to leave the Earth! In 2013 Mars Society announced an open call for volunteers to the long Mars analogue simulation mission “Mars-160”. People from all over the world tried their luck but only eight made it to the finals. The crew had representatives from Australia, France, India, Japan, Russia, Canada and the United States.  This program involved the same crew doing similar science operations for the same period of time – 80 days – initially at the Mars Desert Research Station (MDRS) in southern Utah in 2016 and at the Flashline Mars Arctic Research Station (FMARS) in northern Canada in 2017. Those stations simulate what it will be like for the first astronauts to study the Mars.

Devon Island and Utah desert have many similarities with Martian geology: impact crater, permafrost environment, gypsum deposits, desert climate, clay minerals and sand dunes. The main goal of our mission was same as it would be on real Mars mission – finding the traces of life or life itself. The crew conducted a sustained program of geological, paleontological and micro-biological field exploration while operating under many of the same constraints that human explorers on the Red Planet would face. Most of EVA dedicated to collect samples of extremophiles and after sent to laboratories in USA and Canada. The team carried also Mars-relevant engineering research, spacesuit technologies, EVA traverse strategies, astronaut cross-training and cognitive psychology research under Institute of Biomedical Problems (Russia).

For many months the crew lived in constrains of the limited resources such as electricity, fuel, food, tools, clothes, internet, spare parts, medical assistance and emergency escape from the island. The limited personal space. The limited freedom of actions. The only way to go outside was when wearing a space suit. The high possibility of injuries and even death, if encountering the polar bear at Devon Island. The Arctic part of the mission simulated the wild nature of hostile planet, which inspired and suppressed, played with the mind, challenged the man’s power and showed that we are as close as never before to prove that we can be the planet of explorers.

Crew “Mars -160” collected valuable data, which will help advance humanity’s knowledge of how to explore, live and work on Mars.