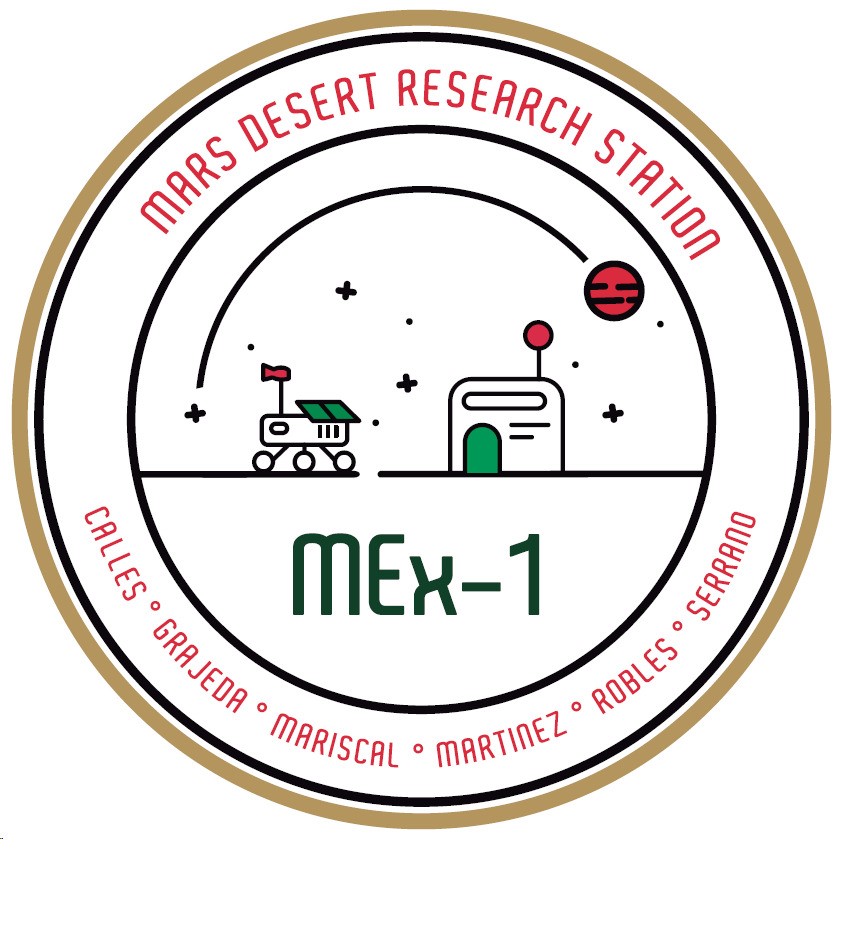 MEx-1 is a Mexican initiative that seeks to encourage the interest of the general population, industry, academia and government of Mexico about the benefits of space exploration and its applications.

This through the creation of the first Mexican program of missions in MDRS conformed by a team of astronauts and a ground support on Earth. MEx-1 is a mission that had the previous support of an aerospace doctor and specialist psychologists to evaluate the physical and mental conditions of astronauts prior to the establishment of tasks and workloads of the missions.

The general objectives of Mex-1 are:

Results: The Crew has been doing daily tests to understand the effects of isolation, stress and heavy workloads on people but specifically what are the effects on Mexican nationals. This tests have been received by professional psychologists and will be analyzed during the next few months and give recommendations for future crews with Mexican nationals as well as an opportunity to test it with professionals doing work in isolation like remote ocean vessels and mining stations.

Objectives: Measure and document the crew’s weight, water consumption and pressure variation during the mission.

Results: The Crew has been doing daily measurements of weight, water consumption, nutrition, heart frequency and blood pressure. This experiment wants to further understand the effects of isolation, stress and heavy workloads on analogue astronauts for future missions as well as to properly prepare selected analogue astronauts on what pre-mission activities are to be done to complete missions successfully. Additional tests on dehydration after EVAs were done to understand the workload and exercise done by analogue astronauts during extended multihour multiactivity missions with space suits.

Results: The VSAT pointing experiment was unsuccessful due to logistic delays for the main component of the experiment. Nonetheless, the 3D printer was used to make 9, 10 and 11 cm wrenches that are standard for the nuts and bolts on an standard VSAT kit and can be left at the station for durability tests as well as strength tests that printed tools offer. The VSAT pointing team performed two EVAs to analyze locations to install the VSAT that could be used for connectivity to make a smart habitat as well as locations for possible microwaves with omnidirectional antennas that can serve the purpose of asset tracking and crew EVA safety.

Objectives: The main objective of using 3D printing is to provide us personalized tools for our VSAT pointing project and spare parts. This experiment will provide support on the construction of a rover prototype as well, and an analysis of the Hab will be done to use this technology to provide daily use supplies.

Results: The use of 3D printing it’s becoming something usual when we talk about manufacture and technology. Having this kind of technology on site gives us advantages as rapid prototyping, personalized tools, variety of materials and many others.

The main idea of using 3D printing was to make specialized tools for the VSAT project on MDRS a set of three tools were designed and printed likesome open end wrench of different dimensions (9mm, 10mm, 11mm) that took around eight hours to be finished. Also the design and printing of an adjustable wrench ready. However there were some issues with the weather and the behaviour of the 3D printer with the Martian weather conditions, plus the logistical difficulties of the VSAT system to arrive to MDRS. It made us took the decision to stop the printing of this parts and focus on using the material on making the rover with the preliminary designs.

The printing of 28 parts of the rover took about 50 hours. This time doesn´t include failed printed parts, software configuration and machine calibration.
At the beginning of mission we assemble, repaired and installed the 3D printer on the RAM. The malfunction of a temperature sensor gave us trouble so it was replaced, however the low temperature inside the RAM was making the parts warping on the corners. After several attends of printing and mechanical and software adjustments, the crew took the decision to move the printer to the low deck of the Hab. This gave us better results, reason why we have been able to print the tools and the 99% of the rover parts.

Due to the low temperatures during the last couple of days, it turned harder to continue printing with the cold weather and wind as main factors. These conditions are not the best conditions for this kind of amateur 3D printers.

We will continue working in these projects on Earth and as a main objective, we will make improves to the 3D printer to make it capable to print on tough weather conditions, starting with an enclosure to keep the heat, a stronger frame, and an extrusion system capable of reaching higher temperature.

Title:  Engaging space to the people

Objectives: Generate audio visual content that will be published to increase the awareness of space sector and the interest of young students and professionals in space exploration from Latin America.

Results: All the material was recorded and will be under the editing process at the beginning of January. It consists in a series of interviews with the Crew members about their daily work at MDRS and personal objectives. It was directed and produced by the members of Crew 201.

Title:  Validation of electronics architecture and communication protocols for an exploration rover

Results: Regarding the electronics architecture and communications protocols of the rover, due to the requirements of the long distances communications; we chose devices capable to transmit at least 1k data. The project consisted in a long distance command data transmission for the autonomous manipulation of the rover.

During the first days of the mission, we worked with the electronics to test the code of the data transmission. First, we started to set up the devices with the software, but it seemed that they had a malfunction or that the PCBs were not working properly. We tried with different devices, different laptops and different software, but the problem was still remaining. During several days of trying to communicate with the laptop, we started to think in alternative solutions. After testing carefully each electronic module and obtaining the same results, we decided to ask for another devices but, unfortunately they never arrived.  While we were waiting for the electronics components, we focused in the 3D printing of the Rover and tools.

Results: During the simulation we were able to take the necessary pictures to test and train artificial vision algorithms for recognition of patterns of colour, form and size as well as distance and depth estimation using stereo vision.  To take the pictures, we used two high definition web cameras fixed and configured to take identical pictures with angle difference.  The pictures taken include several kinds of terrain such as flat, big-sized rocks or hills, small rocks (obstacles) and sand.  Although the algorithms could not be fully functional due to software configuration issues, the images will certainly be very useful for future work.

The software developed is part of the autonomous navigation system of a rover prototype that will explore and help in several tasks both in space and Earth.

Objectives: Prove the expected behave of the mechanical systems of the Rover.

Results: We designed a rover prototype for testing the behaviour of the mechanical parts in hostile surfaces. All the Rover design was completed in México and, during the mission, we printed a scaled version of it, due to the original prototype that we were supposed to use at MDRS never arrived because of logistics problems.

While printing it, we found that the low temperature inside the RAM was affecting in a bad mode the printing, so we moved the printer in the lower part inside the Hab. Later in the mission, we faced some problems with the printing again, such as the air flow inside the Hab, the place was not the flattest for printing, also, some sensors were not working as they must to, like the thermal sensors of the bed and extruder. This stopped us in the advance of the printing and assembling of the Rover.  However, the Rover was built in its 99% and we are still waiting for the last printing parts.

Objectives: Explore, collect and analyze multiple soil samples on the Martian soil on MDRS to test their capability for plants seeding and growing on the Greenhab. Up to 5 different soil samples will be mixed with different combinations of organic material to see which can be used as Greenhab ground.

Results: On two EVAs, 5 different soil samples were collected, categorized and used to test their capacity for growing plants. To get started, those samples were mixed with ground soil in small percentages and tested with three radish seeds. 3 of the 5 samples were tested in the following percentages: Type 1 soil sample in 10,20,30,40 and 50% mixes. Only 10, 20 and 30% showed results. 40 and 50 percent didn’t show any progress, probably for the very low concentration of soil sample/ ground used (234g). For types 2 and 3, only 10 and 20% mixes were tested.

Both showed results, but in a lower scale, compared to type 1. Next steps suggest a new round, using more organic ground (~800g as total). The next step as well should be the categorization and testing of types 4 and 5 of the Martian soil samples. The experiment ran through 8 sols. A separate and more elaborated experiment summary will be delivered to the next crew’s Greenhab officer to keep track and continue with these testings.