Non-nominal systems: nothing to report

Notes on rovers: nothing to report

HabCar used and why, where? nothing to report

CrewCar used and why, where? nothing to report

Summary of internet: nothing to report

Summary of suits and radios: we adjusted an EVA suit to each crew member

Summary of Hab operations: Crew 211 welcomed us and we had training sessions

Summary of ScienceDome operations: nothing to report

Summary of RAM operations: experiments were moved in the RAM

Summary of any observatory issues: nothing to report

Summary of health and safety issues: nothing to report

Questions, concerns and requests to Mission Support: nothing to report

Environmental control: Ambient with door open + fan turned on up to 3

Changes to crops: All plants look healthy, except for the Sage that is getting some yellow and brown leaves. Radish was harvested. Tomato plants seem to need more water.

Narrative: Crew 211 is leaving MDRS, Crew 212 is taking over. The Blue Tank Water was refilled today. Radish, Carrots, Basil, Oregano and Parsley were harvested for dinner.

Mission Status: Getting used to things

Sol Activity Summary: Crew 212 just arrived today, at noon. We had a long conversation with Crew 211 about the state of the hab and how we could take our new roles. We ate an improvised meal made by the talented cooks at Crew 211. We also tried their carrots. Dwarf but tasty! We’re getting ready to taste the burgers at Hanksville.

Look Ahead Plan: Tomorrow, we have a day full of training and trying to figure out our roles in MDRS. We need to get used to our new habitat.

Anomalies in work: All the equipment was reviewed by us. No anomalies found.

Weather: At first sunny. Some clouds have been showing up. We’re fearing rain soon.

HSO Report is going to be sent tomorrow. We’re going to go through the safety indications tonight.

Additional notes: Hope you have a nice night, CapCom!

Today was our first day in the MDRS. We arrived at midday where we met the previous crew. We met Shannon where she gave us information about the station, afterward we replenished the water and food from Hanksville.

We had our first meal in the MDRS prepared by the previous crew.

We started our training by trying out EVA suits and deciding which type suited each of us better.

Tonight we will have dinner together with Shannon in Hanksville where we will have our first group meeting together.

We look forward to training tomorrow for the start of the simulation. 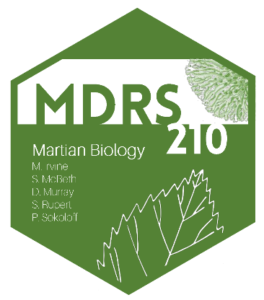 Crew 210 was an international team made up of scientists and outreach professionals from the United States and Canada, who conducted an assessment of the ecology and botanical diversity of the MDRS Exploration Area from April 13-20, 2019.  This was the first non-simulation mission in a planned multi-year biological research program planned for the station; our overarching goal is to increase the ecological and biological knowledge about this unique Martian analog, and bring it up to the level of geological and planetary science research conducted by previous missions.  The three planned peer-reviewed publications stemming from this year’s research program will provide useful data to future crews focused on astrobiology, as well as important scientific data for local scientific and government agencies.  We also sought to increase awareness of MDRS and its mission through a robust online outreach campaign, including images, social media posts, video content, and interactive livestreams.

Ecological Classification of the Exploration Area

To assess the different ecosystems within the station area, our team conducted vegetation transect and quadrat surveys at four locations (Copernicus Valley, Hab Ridge, and two sites along Cactus Road).  At each location we plotted three 10-meter transects and surveyed five 1-meter-square quadrats along each transect in a zig-zag pattern.

For each transect we recorded GPS coordinates at the start and end, the air and soil temperature at the center of the transect, measured the height of the tallest plant on the line, and took a central sample for soil moisture, pH, and salinity. Within each of the five quadrats, we estimated percent cover of vascular plants, and named the top three species (by abundance) inside the square-meter.

By analysing the physical characteristics of the soil samples taken from our transects, we hope to discover the factors driving plant diversity (or the lack thereof) in the quadrats, and by extension, the different ecological areas around MDRS. 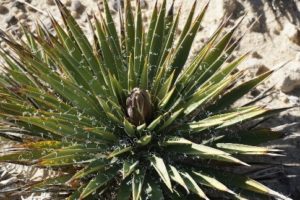 Continuing work started by crew 143 in 2014, our team sampled new vascular plant and lichen specimens within the MDRS Exploration Area to better continue building a floristic baseline for the station. By pressing plant specimens between cardboard and drying them out, the team is left with a flat plant that, of stored correctly, will last for hundreds of years.  The 64 new plant samples collected during this mission, accompanied by a label indicating the location and date of collection, will serve as the proof that these plants were found growing at a specific place and time. Once identified to species, these plants will make up the backbone of our first planned publication from this program. 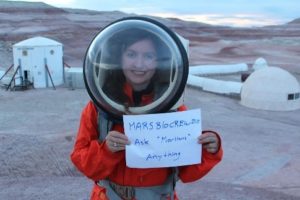 Our outreach program took advantage of the extensive network of Live It (liveit.earth) to educate the public on our mission and MDRS.

During one week of outreach the MDRS210 and Live It reached:

We conducted an “Ask A Martian Anything” on Reddit, where we responded to about 50 questions (over 400 interactions on the website).

Our immediate plans are to publish the ecological and plant data in peer-reviewed journals, and to continue our outreach efforts using photos and videos taken on this mission.  We are currently putting together a plan for future biological survey missions at MDRS, branching out into new groups including reptiles, birds, mammals, mosses, and microbial life.