From January 16th to the 30th, 2022, the second Colombian Mars Simulation Analog Mission took place in the MDRS. The team got integrated by Colombian students, researchers, and professionals in the areas of Science, Engineering, and Technology strongly related to the aerospace field. Among others, some challenges the mission crew encountered were to go through confinement and isolation in this habitat for 15 days, on a diet based on dehydrated food, and limitations on the use of water and communications.

The Crew Organizer is David Mateus, a Mechatronic Engineer and Master’s student in Space Studies at the University of North Dakota.

The main line of work is related specifically to the areas of expertise of the crewmembers, developing projects following years of studies and preparation, and, as it usually happens in space exploration, collaboration with teams left back on Earth. The second line is about the interest in developing outreach projects in Colombia. Our country does not have a well-developed space field, and these kinds of opportunities provide a platform to develop several types of outreach activities, from general to specialized public. 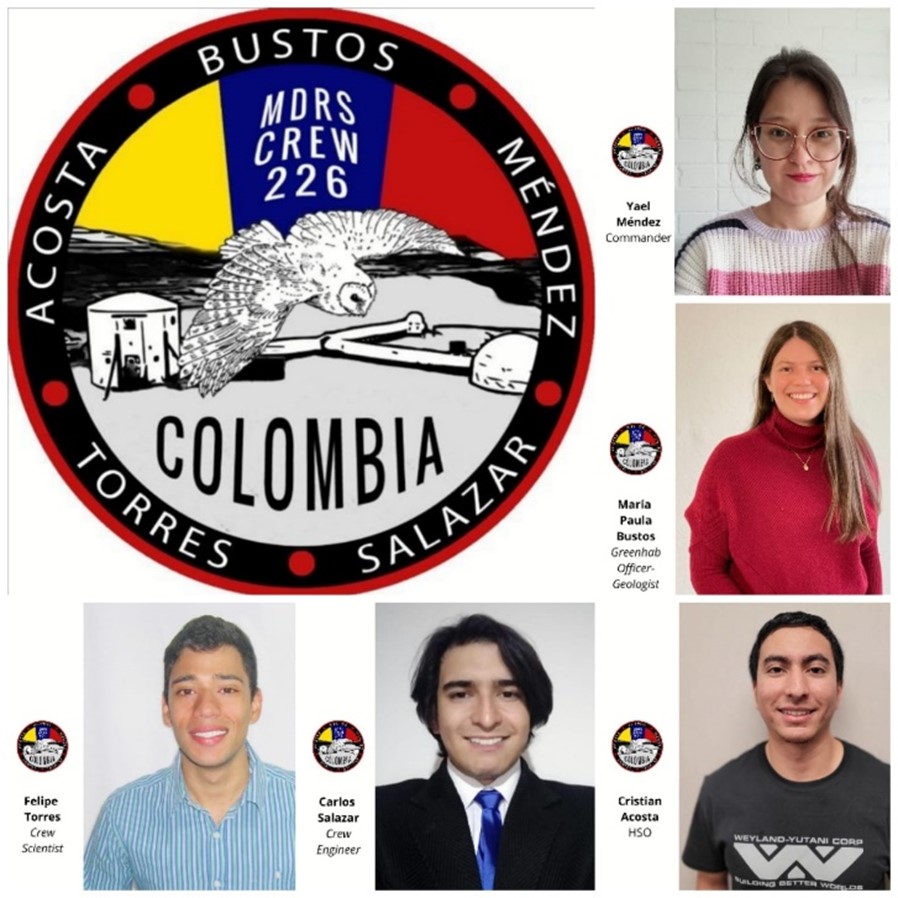 The crew executed a total of 8 EVAs during the 2 weeks period at the MDRS. Appendix 1 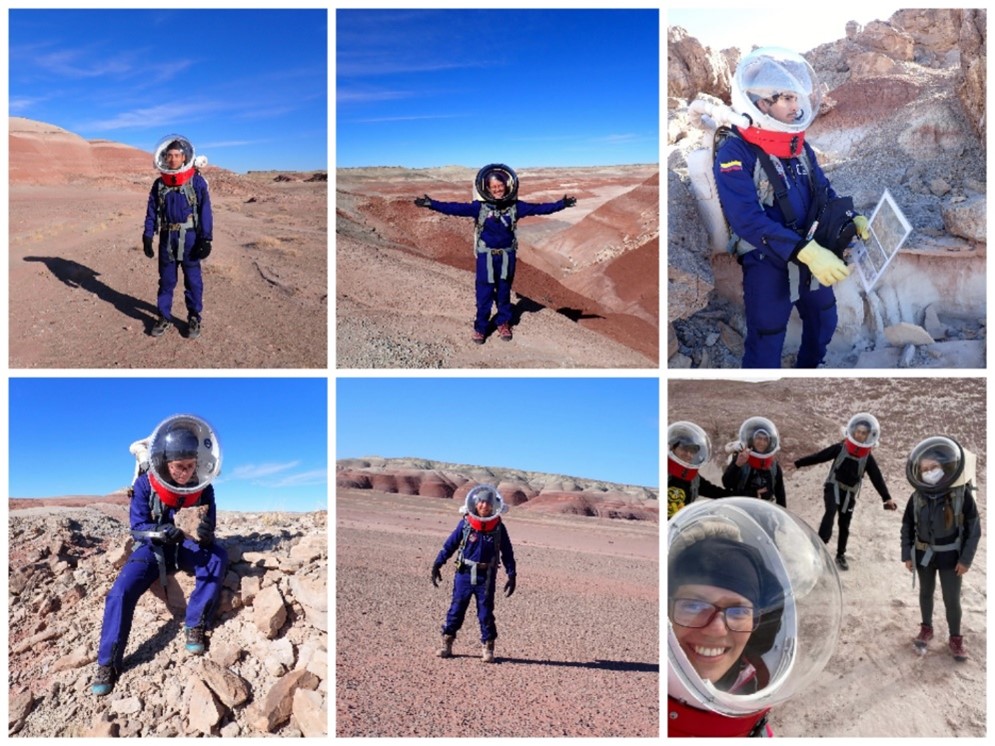 Water consumption was monitored daily as well as the status of charge of batteries powered by the solar panel system. All mechanisms functioned nominally throughout our mission except for the energy system which controllers failed one day before ending simulation. 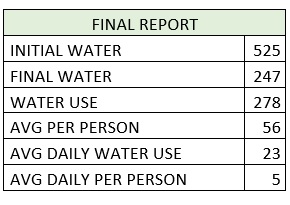 The overall health for crew 226 during the mission was good. No one developed any severe illness or injuries while at MDRS which was always great to see. Nonetheless, the following symptoms developed among the majority of the crew members at different times: coughing, sneezing, headaches, chills, sore throats, and acid reflux. Aside from the acid reflux, these symptoms were manageable with specific vitamins and medicines and never worsened after appearing. The only minor injury sustained by a crew member was that of the rolled ankle which saw inflammation. But with rest, pills, and creams, both the inflammation and pain went away and recovery was speedy. Another note was that of personal hygiene and although the crew has not taken a shower in 12 days, they have been very good with using facial wipes and other personal hygiene products to stay relatively clean throughout the mission.

The green-hab was received on the 18th of January 2022. Several kinds of plants such as cherry tomatoes, herbs, carrots, lettuce, micro-greens, peppers, and cucumbers were already planted on our arrival. During the two-week rotation we harvested the following: 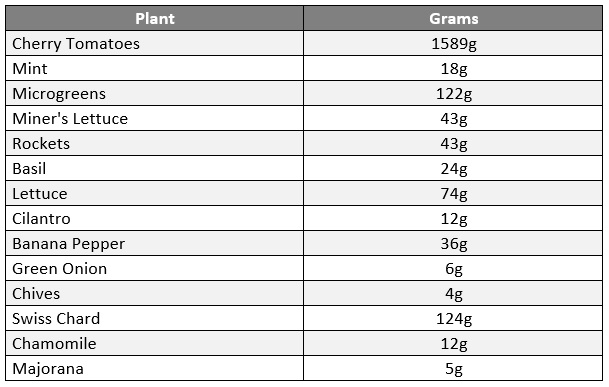 Additionally, the following was planted: lettuce, microgreens, chives, lemon balm, cilantro, and red bunching onion. Some of them are already growing and are expected to be harvested in the following weeks.

Description: Build a system that gets point clouds taken with a 3D camera on an element like the Kinect sensor and joins them together to make a 3D map of the environment and locate itself in it. The following tasks have been defined:

Methodology: The method of research selected for this project is going to be experimental, the samples taken with the sensor will be taken mainly in indoor areas or in a controlled environment, a portion of the solution will use methods from the point cloud library PCL using example point clouds. The idea is to check if those methods work with our samples and how a correct integration of all the modules can be made, identifying its weak points to propose and evaluate ways to improve them.

Preliminary Results:  A lot of pictures for structure from motion were taken during an EVA, some processing is needed to turn them into point clouds. The Kinect was used in the hab and the samples will be used to test the algorithms that will be developed later.

Project Title: Classical music and the growth of plants at MDRS

Description: Evaluate the growth of cherry tomatoes and mint plants in the station under the sound of the classical music of Johan Sebastian Bach by exposing these plants daily to Bach’s songs and comparing them to a control group that is not going to be exposed to this music, and determine if Bach songs have an impact in the rate of growth of these plants in the MDRS Green-hab.

Methodology: 1) Select two cherry plants and two mint plants that were cultivated at the same time and exposed to the same conditions during the last weeks and measure the size of its leaves and the number of fruits and flowers they have. 2) Expose daily for three hours one mint plant and one cherry plant to Bach songs. 3) Measure daily the size of the leaves and the number of fruits and flowers of each of the plants exposed to classical music and the ones not exposed (control group). 4) compare results and determine if the exposure to Bach classical music affects the growth of tomato cherry and mint plants in the research station.

Results: We performed experiments in which we daily exposed two cherry tomato plants to Bach’s classical music for three hours. We exposed one of the two plants (Plant A) to the music at a distance of 1cm, while the other one (Plant B) was exposed to the music 7 meters away. After two weeks we found out that plant A, grew less in terms of new fruits and flowers compared to plant B. We cannot conclude that music was the only factor that could have influenced the growth of the plant since there were also a lot of insects that infested plant A. Further research with more controlled parameters should be performed in order to have concluding remarks regarding music exposure and plant growth.

Description: Analysis of the insulating efficiency of a biaxially oriented polyethylene terephthalate (bo-PET) film in order to determine the feasibility of building an emergency space tent for EVAs in Mars and other aerospace applications using this material.

Methodology: Take measurements of Humidity and Temperature using a DHT11 sensor and Arduino. These measurements will be taken on different control volumes outdoors both with and without the thermal insulation provided by our material. To consider meteorological factors, these measurements will be taken at different times of the day and at different locations around the station. The insulative material will then be tested on different crew members, by providing a protective layer with the material and the body temperature will be measured with and without this insulative layer.

Figure 1. Temperature and Relative Humidity measurements with and without insulation.

Description: This project seeks to use Mars Desert Research Station (MDRS) to analyze the impact that clay variations have, and recognize their mineralogy through laboratory techniques (reflectance spectrometry and Raman spectroscopy), and compare that with the instruments applied in the perseverance rover.

Methodology: Collect samples of different types of clays found in the MDRS and they will be process in Colombia by Grupo de Caracterización Tecnológica de Minerales at Universidad Nacional de Colombia. 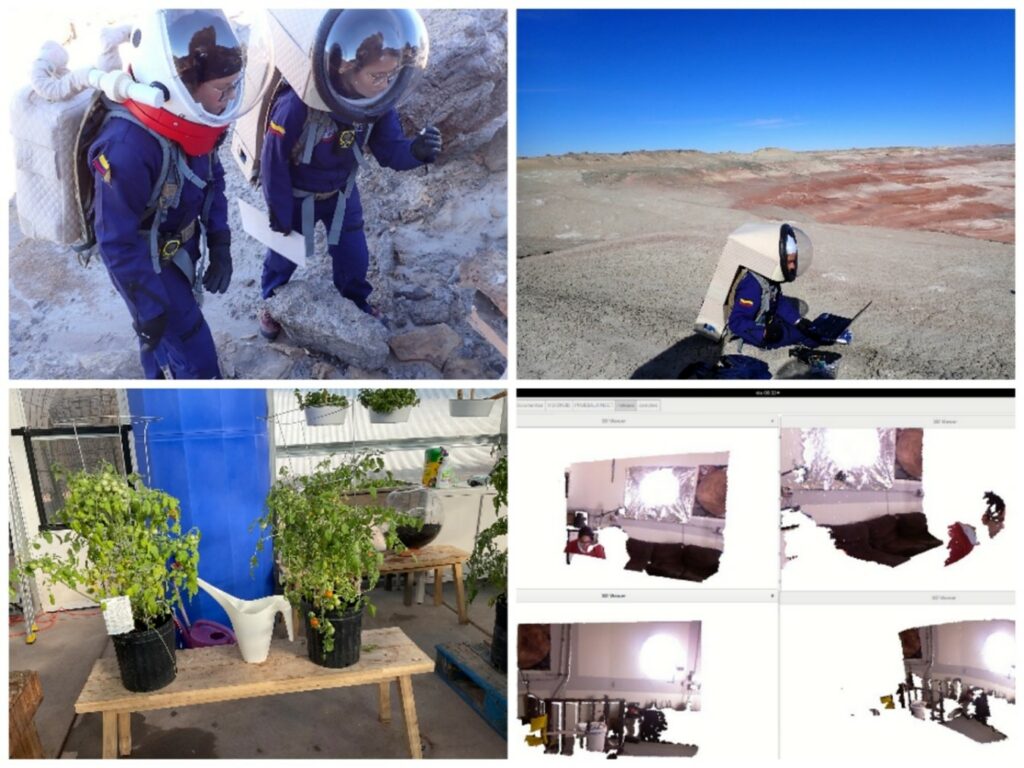 MDRS Crew 226 wants to acknowledge and thank all the people and institutions that made this possible. It’s been a two-year-long process that required a significant amount of effort from several people. We would like to start by thanking The Mars society, in the head of its president, Dr. Robert Zubrin, as well as Director Dr. Shannon Rupert, and Atila Meszaros, who made us feel safe and welcomed. We would also like to thank all the Capcom officers who were ready to take our reports and comments. And also, all the people behind the scenes working actively to make this possible, but surely helped us make our mission smoother and wonderful. 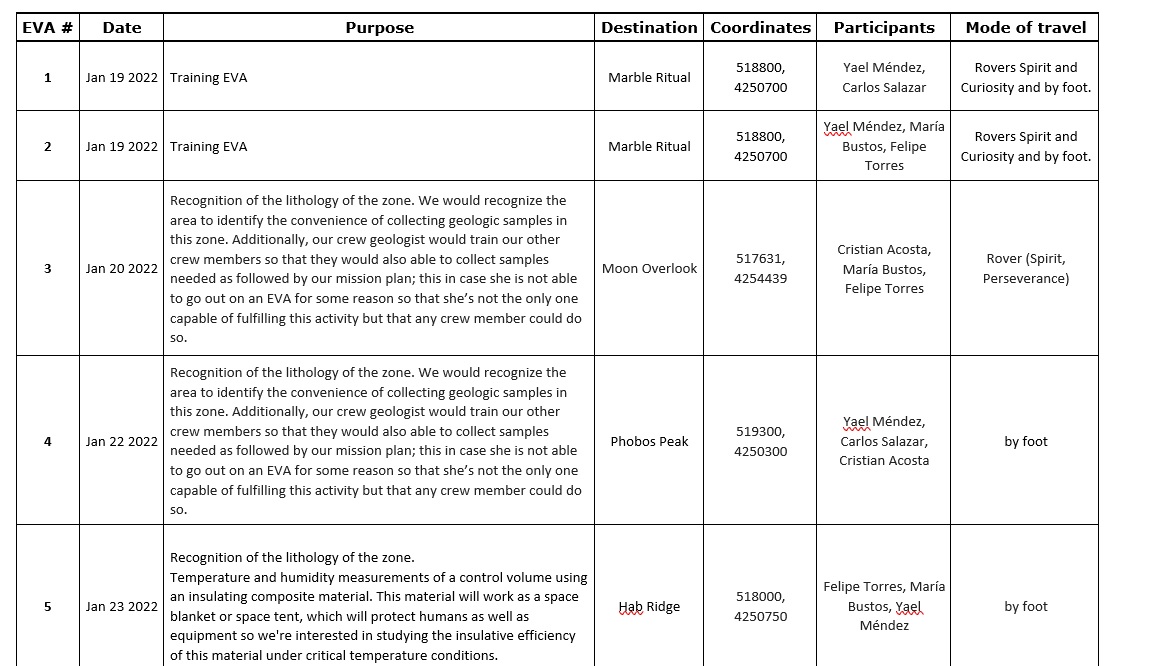