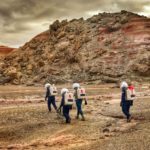 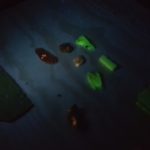 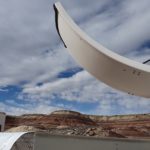 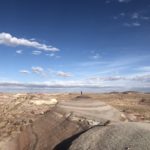 MDRS Crew 216 was an international crew whose projects and interests are reflected in their chosen name: Arts Research Education and Science.  This was the initial experience for all crew members at MDRS, and their first priority was for personal safety and that of fellow crew members.  Second was to maintain MDRS facilities, vehicles, and equipment in a safe and operable condition.  Finally, crew members focused on completing their planned projects while living in a Martian analog environment.  Below is a summary of projects, their status, and other activities at mission conclusion.

Martian colonists will have to exploit local resources to survive and thrive on Mars.  UV searches can identify possible sources of rare-earth ores, radioactive ores and other useful minerals, such as industrial gemstones for cutting, polishing and abrasive processes.

Traditional rock sampling, either by chipping rock faces or cone and quartering (alluvial gravel) would net only small samples (kilogram or smaller scale).  A large scale survey would take many EVAs.  An in-situ UV search of a rock-face or a gravel deposit can rapidly scan many tons of material in a matter of minutes.  If a target “lights up,” it could then be sampled for further analysis in the Hab.

For this project, a portable 6 watt Analytikea Model UVL-48 ultraviolet light source in shortwave UV mode was utilized.  Two key terrain types were favored for the UV survey:  rock faces in cliffs or canyons and alluvial gravel deposits.  The former present an opportunity to rapidly scan multiple layers of rock and identify target-rich epochs in the Martian geologic history.  The alluvial deposit survey capitalizes on Martian erosive forces self-selecting out “harder” materials of interest (in Mohs scale context), such as industrial gemstones.  Four target areas were planned to be selected based on imagery reconnaissance, two rock faces, and two alluvial deposits.  Target priority was to be for ease of access to minimize travel risk during the EVAs.

To reduce the risk factor, only two EVAs were conducted for this project.  A morning EVA identified a safe travel route and potential survey site at Robert’s Rock Garden.  That evening, a second EVA was undertaken in partial sim (flight suits only) with permission of the Mission Director for safer nighttime operation.

Project status: Samples collected in the field were analyzed in the Science Dome, and a paper detailing the results of the UV survey will be written and submitted to the Mars Society after the completion of the mission.

This project was to capture footage for a one-hour film in the style of a “poetic documentary.”  It was not to be a pure factual coverage of the crew’s MDRS experience with a linear narration.  Rather, questions to be explored included:  What is behind our dream for space?  What are we trying to learn through learning about space? Our future?  Or actually is it about our past, and are we looking for understanding about where we come from and where do we belong?

The first years of Mars colonization will hardly be easy for humans: confined space, dehydrated food, heavy spacesuits, no green color of nature, and missing home.  There will be not much intimacy, but there may be solitude.  Still we are driven by some dream, instinct, or curiosity to explore beyond.  One aspect of the film is to capture the evolution of the emotional state of the crew members.

Filming was undertaken every day during working hours, meals, spare time, and evenings, as one could never predict when something interesting was going to happen.  Several EVAs also captured the landscape and activities of team members.  Those who agreed to be filmed during an EVA were equipped with a small microphone inside their spacesuit.  Additionally, each crew member participated in a 40-minutes interview, and release forms were obtained from all crew members who were filmed.

Mars analog astronauts undergo a rigorous selection and training process to ensure crew cohesion and mission success.  However, even the healthiest, strongest individuals may face psychological challenges due to various stressors in extreme or abnormal environments. Examples of these stressors include isolation, confinement, close living quarters, monotony of food, delayed communication with ground control, time pressure, scientific or engineering failures, sleep difficulties, fatigue, etc.  In our effort to further human space exploration in a safe and effective way, we must thoroughly understand and protect the psychological and physiological well-being of crew, before, during, and after the space analog mission.

This project aimed to study crew member behavioral traits, including anxiety and depression levels, before, during, and after the mission using standard questionnaires at several intervals. This would allow us to better understand psychological well-being in response to known and unknown environmental stressors. This project further aimed to study the correlation between crew anxiety and depression levels and the possibility of a “third quarter phenomena” (TQP), whereby the first quarter of the mission may be characterized by crew excitement or anxiety, the second quarter by boredom and depression, and the third quarter by increased emotional outbursts. An addition to the study was to examine basic physiological changes in subjects over the course of the short duration analog mission to explore transient changes.

All crew members were contacted prior to mission to receive information and confirm if they would agree to participate.  Once on station, all crew members signed a form detailing the process of the research, any risks, and their consent to participate.  Note: This research was not for clinical findings, but for research only, with the research approved by the Texas A & M University Office of Research and Compliance.

Project status:  As of this summary, three-quarters of the surveys were collected, with the final one to be collected prior to departure.  The surveys will then be analyzed once they have returned to Texas A & M University.

This project was to gather material to spread awareness of The Mars Society objectives and the Mars Desert Research Station by developing materials for a public presentation.  Activities included filming crew member self-introductions; recording the experience of maintaining physical and mental well-being living in a confined space with strangers for 14 days; an introduction to the physical structure and utilities of MDRS; a description of meals, water and energy resources, and waste conservation practices at MDRS; EVA procedures; and capturing drone video footage of MDRS, surrounding desert features, and EVAs on rovers.  Each crew member signed a written consent to be filmed for this project.  Additionally, taking pictures and observing celestial objects through telescopes in the Musk Observatory was undertaken in the role of Crew Astronomer, as was maintaining the GreenHab as the GreenHab Officer.

This was a continuation of a Crew 215 project to collect gypsum samples to produce Plaster of Paris for application in medical interventions stemming from splinting to preliminary dental impressions.  This project required EVAs to collect and return materials from the field.  Three different ratios of water-to-gypsum were tested to conduct strength tests on the samples.

Project status: Using the best ratio of two parts gypsum to one part water, a plaster splint was created as proof of concept.

The current MDRS radio communication system of GMRS (UHF) handheld radios with an output of 2 watts limits how far EVA teams can communicate with the Hab.  A system utilizing VHF frequencies would greatly expand the range of radio communications.  Such a system would include handheld radios with 5 watt output and a solar-powered repeater with antenna located at an optimal site.  The design of this system would be a test bed for similar systems that could be deployed on Mars.

Viewshed analyses of various high points around the MDRS using geographic information system (GIS) software were undertaken, followed by EVAs to confirm the effectiveness and accessibility of these sites.  From these, it was determined that the summit of the North Ridge provided the widest radio coverage for those areas potentially explored by MDRS crews.  During an EVA, a team found an excellent site on the summit for a repeater location with direct line of sight to the Hab and confirmed the potential wide area radio coverage.  The team also mapped an accessible route, so that a future EVA (or non-sim work party) could carry the necessary components to the repeater site for installation.

An additional communications project attempted an amateur radio contact with the International Space Station (ISS) when its orbit passed directly over the MDRS.  This utilized a mobile radio in the Crew Commander’s personal vehicle set up in cross-band mode to allow the contact attempt to be accomplished from inside the Hab via a handheld radio.  The project required two short EVAs to set up and turn off the vehicle’s radio.  Crew members Levesque (W5MTS) and Lawson (KN4WOK), FCC licensed amateur radio operators, undertook the contact attempt.

Project status:  An optimal radio repeater site was identified for an expanded communications system.  If such a system is desired by The Mars Society, further research could be undertaken to determine the most suitable components for the repeater and handheld radios.  Should the project be implemented, The Mars Society would obtain an FCC license for VHF/UHF commercial frequencies that is available for non-profit and educational organizations and would provide the MDRS with its own unique frequencies.

Contact with ISS was not made, most likely due to no astronaut operating the onboard amateur radio at the time the ISS was passing MDRS overhead.

A production crew from Al Roker Entertainment spent a mid-mission sol with our crew to film one episode of a planned six-part science series to be aired in 2020.  During their visit, they filmed the area around the MDRS and its facilities inside and out, interviewed the crew as a group and a few individually, and filmed an EVA.  Our crew accommodated their requests in good spirits while maintaining sim.

The selection of Crew 216 composition is to be commended, as the team worked extremely well together.  All members adapted in good form to conditions at MDRS and went above and beyond to complete station tasks and support other crew member’s projects, tasks, and activities.  As Crew Commander, I could not have asked for a better complement of bright, talented, creative, and enthusiastic individuals.  Given the steep learning curve that all members, including the Crew Commander, faced in their initial experience with station operations and protocols, I feel all performed exceptionally during the MDRS mission and are to be commended for their efforts.