Narrative                  We arrived almost two weeks ago on the red planet and things really start to align. The procedures in the habitat are very natural to us and our days consist of tasks and rituals and keep us busy. Our preparations for the EVA have become faster and more efficient every day. We now detect malfunctions of the equipment way before they become crucial and are prepared for any kind of circumstances.

Therefore it is a pity that today was our last EVA for a long time. There are other tasks, that are waiting for us in the weeks to come and the weather on Mars is supposed to become more severe and will keep us from further explorations. Surely the EVA’s were the highlights thus far for us on this new planet, but I am confident, that we will soon have the chance to explore the world outside of our habitat even more intense.

But there was no time for regrets, we got our Marsonaut Mojo on and were poised to enjoy our trip to the Martian surface today. Commander Horn and Science Officer Trivedi were leading the way to the Blue Hills today and we relied once again on our trustful rover Deimos. The sky was clear of clouds and the temperatures were really welcoming to us humans, as we like it rather a bit warmer.

Most of our roads very flat and had little elevation. We passed white salt-plains and always had the Blue Hills in our sight. Although it took as a little longer to reach our destination, we were always on top of our schedule. The Blue Hills marked the seventh and last location for Officer Trivedis Matryoshka project and brought a temporary halt to his scientific explorations on Mars.

When we reached our destination he quickly selected four designated excavation sites for geological stone probes and so we proceeded to collect samples. As a picture creator I can already read my fellow crewmembers well and have a feeling how they move and what their next step might be. Still it is difficult to catch up with them, because they have their scientific agenda they have to meet and there is little time for extra shots.

I find it really impressive that we managed to stretch to almost every corner of the Martian terrain that is accessible for us at the moment. I think in the next weeks and months we can work out an extensive plan how to go beyond the borders that are determine our existence on the red planet. I am very hopeful for this to happen.

On our way back Deimos proved to be a real hero. As our parking position at the Blue Hills was a bit wobbly I was pulling the hand break to secure the vehicle. When we started our way back home Trivedi and me forgot about this security action and drove on with the break in use. In a short span of maybe about five minutes our battery was drained from 80% to approximately 45%. Fortunately we discovered the decline early enough and put the break down.

From that point onwards it was a race with time. We were almost at the furthest point away from our habitat, than ever before and with the lowest account of energy. There was no other strategy than to try to get as far as possible and then to access the situation anew. With every mile the battery dropped lower and lower.

Even though we reached the main Cow Dung Road soon enough elevation became bigger and bigger challenges. I exited the rover and tried to push it over the little hills in the road. We were determined to get home, even if it would have meant, that we have to push Deimos home. All other rescue plans would have been to time consuming and would include too much communication with mission control.

By now we were really slow and hoped every turn around a hill would give view to our habitat. It still took an eternity but then we saw it and boy, coming home was never sweeter then today.

Effectively we were only five minutes behind our planned return to the base and finally we plugged in Deimos and gave our little hero his well-deserved rest. He is charged now with the finest batch of energy Mars has to offer.

Personal Logbook             I had the privilege to be on every single EVA in the past two weeks and it was a hell of a ride. Even though the intensity of wearing the suit and chasing after my protagonists were draining my energy at times the adrenaline of creating great pictures kept me going. I was always busy with the next picture opportunity ahead, preparations for the various cameras and stowing the equipment away. It was always a race with time and the caution not to leave anything behind. It was a constant battle between the things I wanted and the things that were possible, a real time evaluation of the respective situations at any given moment. It was one of the most challenging working environments of my life and one of the most beautiful and meaningful ones. 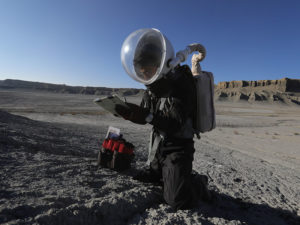 Today marks the end of our scientific mission and the completion of our three remaining scientific objectives.

Our martian day sleep study ends tonight with a 4am bedtime, 12pm wake up.  Our team prepped extensively for this and arranged numerous protocols to handle crew fatigue and performance drop off due to tiredness.  Luckily we haven’t had to use any!  Our team has remained in good spirits and been able to keep to our sleep schedule well throughout our mission, with the occasional controlled nap being used to support a flagging crewmember!  We’ve focused on mentally demanding activities and music to keep the crew focused and alert in the evenings to allow us to hit our sleep targets.

Today we successfully completed our last Matryoshka objective!  This was the farthest we’ve had to travel for an EVA, which is why we left it till last to capitalize on the experience we’ve gained in the past two weeks.  We took the Deimos Rover and an ATV to ensure we had sufficient range to meet our objectives and departed from the HAB at around 1pm, arriving at our objective at around 2pm in the Blue Hills area.  Our goal was to get samples from the ridgeline as it washed out into the plane of dirt to try to identify different materials in the mixing area between the cliffs and plains.  We successfully took samples from this area and several isolated hilltops in the area and packed up from or last EVA to return home.

We weren’t going to get off easy however, as that hasn’t been our type of mission.  Due to user error when we started home the parking break was left on for ~ 5 minutes, which resulted in a precipitous power drop off from ~ 80% to 40%.  After the problem was noticed and corrected we discussed options.  The Blue Hills area is actually a fairly close walking distance from the HAB, but a long driving distance, so the decision was weather to leave the rover and walk back to the HAB or to take the long way around on the roads and trust the Rover to make it.  After assessing the fact that the Rover utilized ~ 20% battery to get to this location, had 40% remaining, and that we had a functioning ATV to get help if we broke down on the way we decided we had high confidence in getting the Rover back to the HAB and started the long drive back.  It made for an anxious drive back and frequent map checks to ensure we were going the right way but we managed to successfully coax Deimos back to the HAB just as the low battery light turned on at 20% SOC.  Another successful, and exciting, EVA!

Today we completed our Anesthesia runs ‘for score’.  Under the supervision and evaluation of our resident doctor two crewmembers at a time formed a team and had to evaluate a test mold he has created to mimic a human leg.  Inside the mold the team must use the instructional videos and procedures provided to identify various components inside the mold (veins / arteries / nerves / etc. . .), identify the proper spot to apply anesthesia, then go through the process of delivering anesthesia to the leg.  Hopefully this research and experimentation makes good progress towards developing medical trainers that can be used with astronauts on a long duration mission that may not have anyone on board with medical expertise.

Unfortunately cloud cover prevented any viewing of the Geminid meteor shower last night (of course the only cloudy night was the one with the meteor shower!)  It is currently clear and we intend to try again tonight to see if we can catch the tail end of the meteor shower.

Tomorrow we focus on MDRS cleaning, packing, and transition to the next crew.  We will also be doing an EVA strictly in the environs of MDRS to get some last filming done as requested by our journalist.

1.    HAB Water Leak continues from under EVA door.  It appears to be getting worse.

Generator (hours run): Generator turned off at 10:00am.

Trailer to Static Pump used – No

Notes on ATVs: ATVs were nominal

HabCar used and why, where?  No

Summary of suits and radios: All Nominal

Summary of RAMM operations: Not Operational

Summary of health and safety issues: Crew is Healthy

·         Finished planting the rest of the seeds in the planter from left to right, towards  the door to away from the door:

·         Good. Increased due to one planter being drier than the rest