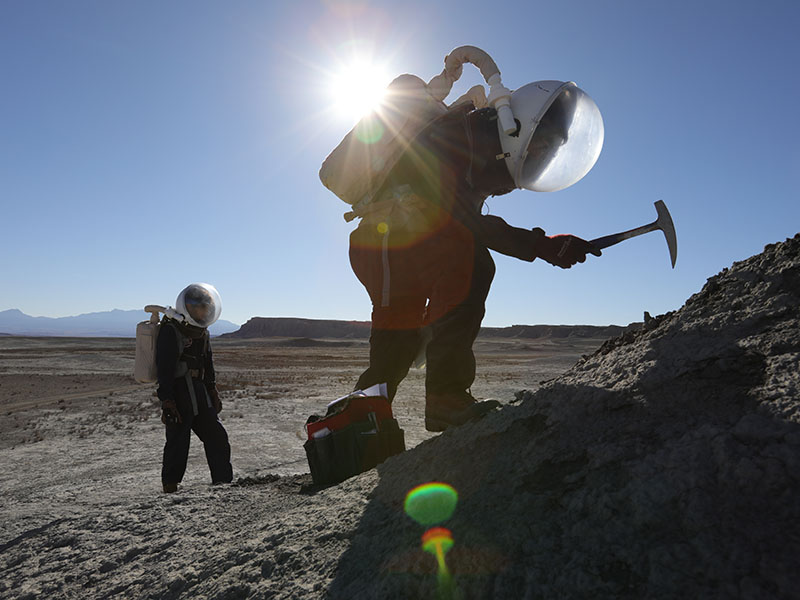 Summary Title:  Getting back on routine (and our first EVA failure!).

Today was a successful day and will hopefully  mark out the routine we will follow until the end of our mission.  The generator has been completely functional now for two days since our repairs over the weekend which is thankful news, our power problems seem to have abated themselves for the mission (though I may be jinxing myself. . . .).  In addition, the weather has been getting warmer which is a welcome relief and allows me to finally stop wearing my thermals, which is a welcome relief as they could sorely use a wash!

We resumed this week’s round of Matryoshka EVAs with a successful visit and sample collection to Site #5.  Just two more sites to go and we will have completed our most important EVA objective of our mission.  We managed to collect several soil and rock samples from what appeared to look like river channels. We saw shiny glinting on the hills too and found some shale like specimens for analysis. All in all a successful EVA! One thing that has come about is the hazard of the strong sunlight in your face reducing visibility, as there is no sun visor on the helmet and sunglasses are not recommended. Luckily it caused no issues on this EVA, but could potentially be dangerous if sunglasses are to remain forbidden and visors are not added to EVA helmets.

During the EVA return our EVA crew encountered a failure with the Deimos Rover.

Deimos left the HAB at SOC 100% and was driven for ~ 45 minutes to the site with no issues.

When returning from EVA site Deimos started experiencing significant mechanical drag that both lowered the achievable rover speed and increased battery drain.  This problem persisted for roughly 30 minutes until the Rover was able to return to base.  From the onset of the problem it was roughly steady until the turn was made off of cowdung road to return to the HAB.  At that time Rover performance precipitously dropped and was able to achieve little more than walking speed.  Steering was also noticed to be stiff during the return from EVA site.

The EVA crew reports that from a driving perspective it felt like the parking break was on, though visual inspection showed this was not actually the case.  The root cause of the issue was not determined though we will do an inspection during tomorrows EVA.  We suspect the issue may be due to debris in Deimos’s drive train.

At the end of the EVA Deimos was at 29% which is unusual given Deimos’s long range and is likely related to the experienced ‘drag’ when driving Deimos.

For the folks left behind today we were primarily occupied with Solar observation which showed numerous impressive features that made observing a treat.  The sun is waking up!  Hopefully it stays active for the next few days and into the next mission.

We are entering the period of our mission where our Martian Sleep Schedule has moved our days ‘out of phase’ with Earth normal.  Tonight we will be going to sleep at 2:40am and waking up at 10:40am.  We have been primarily occupying our nights with cleaning, Bricks, Anesthesia training, and general maintenance to prepare ourselves to fully utilize the next day’s daylight hours.  Our team has adjusted to the schedule well so far with crew taking naps as needed to stay on schedule.

Thanks for your help!

1.    HAB Leak from under EVA door (not noticeable today)

Summary:   We were able to observe three prominence’s on the limb of the sun which were visible using the eyepiece as well as the camera.  They are imaged below.  In the raw image it was impossible to view the prominence and the sun surface at the same time (as expected).  We are novices at photoshop, but attempted to optimize different parts of the picture for different settings to allow both features to be present in the same image.  Images of the three prominence’s are attached that were experimented with.  If anyone has advice or instructions on how to better utilize Photoshop to allow two very different features to show through in the same image it would be welcomed. 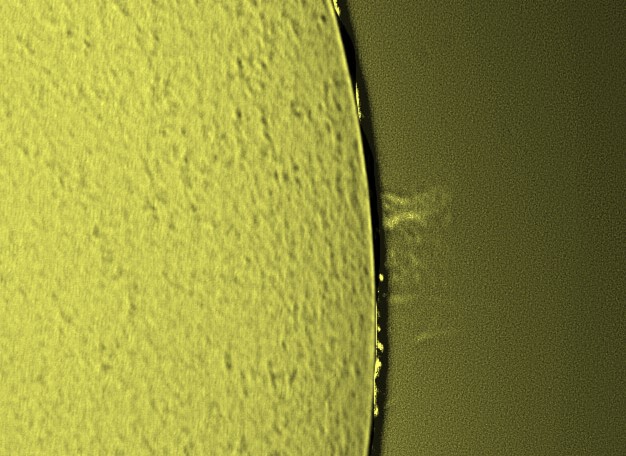 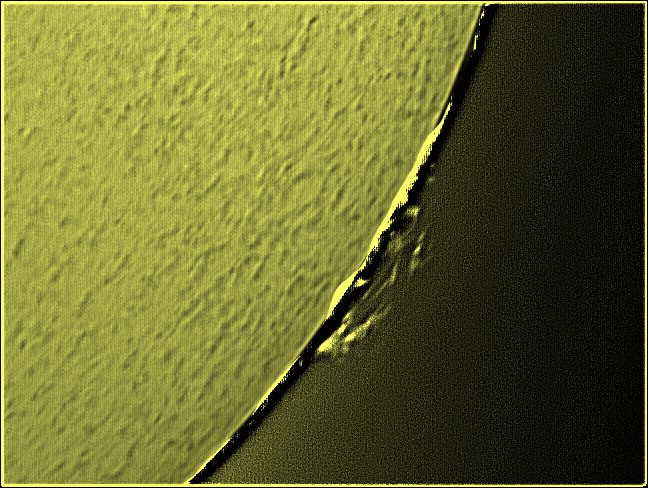 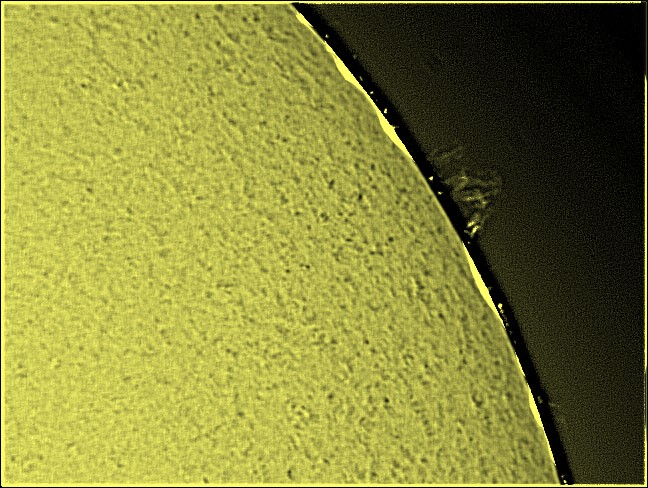