Only 4 pictures today, and I apologise for it – Sundays are quiet-ish
here and pictures end up low on the priority list. Besides, it’s too
early for pizza pictures, sadly. We can try to improvise something last
minute if absolutely necessary, but I’m afraid this’ll have to do.

Hi everyone! Today is the second episode of “Focus on”, our format in which we focus on our scientific experiments! In this episode, we are going to focus on some experiments managed by Marion and François, related to the field of Human Factors! I can’t wait to tell you more about those cool experiments, but first, as always, I will talk to you a bit about our Sol 6 on Mars!

Today was definitely not the most exciting day of the mission, but I can still manage to find something to tell you!

First thing, it was Sunday! Sunday is supposed to be a real rest day during the mission, but as we are on Mars, there are still things to do!

This morning Clément and Julie had to perform a short EVA to change the battery of the LOAC, our outdoor experiment I mentioned in a previous report. In fact, we have to change the battery every day when we go on EVA, so Sunday is not an exception. We can’t afford to lose precious data. To give our EVA team strength and motivation, we made pancakes with maple syrup, which is without a doubt the favourite breakfast of the crew!

This afternoon, the tasks were split within the crew. One part of the crew was in charge of cleaning the Hab. It is important to keep the Hab clean as we spend a lot of time in it.

In the meantime, the other part of the crew was performing a human factor experiment created by the University of Lorraine (but Francois will tell you more about that in the « Focus on » part of the report).

I almost forgot to keep you updated about the 3D printing of the custom funnel! They did it! Our amazing team managed to make the 3D printer work and after a stressful afternoon of waiting for the final result, this is it! We are really happy, mostly Julie who will be able to recycle water more efficiently. Our engineers can’t wait to design and print new pieces!

As you can see a Sunday on Mars is not exactly the same as on Earth, we still have to do a bit of work! But it is very pleasant to stay later in bed, skip the workout and work less than during the week!

Moreover, tonight we eat pizza! This will be the first time and I can’t wait to taste it! We will also try to finish our reports earlier tonight to watch a movie all together on the couch, like a real Martian family! We still have to decide which movie and I hope there will be no fight (I personally hope for an extended version of Lord Of The Rings but I doubt that everybody will be down for it).

Now it is time for the part everyone has been waiting for (at least we are going to pretend for the storytelling as I can’t have your live feedbacks). This is what we talked about with Marion and François:

– We are doing well, got to sleep in today since it is Sunday and have some pancakes for breakfast. So let’s say our day started well!

– Ok, so today we are here to talk about Human Factors experiments. Marion, can you explain why Human Factors are particularly relevant in the MDRS context?

– Human factors experiments are important for future crewed missions to Mars as we need to be able to understand how humans will react to being on another planet, with a particular group of individuals in a confined space for an extended period of time. Being at MDRS is as close as we can get to being on Mars and particularly when it comes to confinement and isolation, it is quite representative. By performing these experiments on crews at MDRS, we can study, analyse the results and draw conclusions that can be applicable to future missions to Mars. If we can predict the adverse effects of being on Mars then we can better prevent them and support the astronauts on their journey.

– François, can you explain what is the aim of the experiment created by the University of Lorraine?

– This experiment was created with researchers from the University of Lorraine and studies the psychological and physiological evolution of crews during their mission. We answer questionnaires that study the evolution of our emotions, the group dynamics and our relationship with our workload. We also perform tests that study our focus, our memory and our attention. For example, one test has shapes of different sizes and colour show up quickly on the screen before our eyes. We have to press a button when the same shape appears twice consecutively. This may seem very simple but this task lasts 15 minutes. It is without a doubt the most rigorous and tiring task. Another test consists in observing a sequence of numbers. When the current number on the screen is the same as the second to last, we have to press the button. This requires a lot of focus as well as good memory. Finally, we cut some hair samples before and after the mission. Indeed, the cortisol present in human hair is telling of the level of stress the person is under. This experiment allows to understand better how humans react to confinement and stress. This will be helpful for future crewed missions or even just prolonged confinement.

– Ok so cool! I can assure whoever is reading this that the “shape test” is very tiring! And what about your experiment Marion? What is Teleop?

– TELEOP is a tele-operated rover experiment created by the human factors department of ISAE-SUPAERO. It is currently also in use in the SIRIUS-21 mission in Russia. The experiment puts its subject behind the joystick of a rover on the Moon. The subject has several tasks to complete in a certain amount of time. These include tasks such as picking up samples from the lunar surface, driving it to the lunar lander and docking with the latter to give the sample for analysis. The subject is not just under time pressure but also needs to make sure that the rover still has enough battery and does not fall or flip as the task will fail. Each task is performed in three different positions, standing up, sitting down and laying on one’s stomach. The goal of this experiment is to study the effect of body position on performance as well as the effect of fatigue on the subject. It is expected that the subject would probably worsen its performance throughout the mission due to fatigue but there could also be an increase in performance as the subject learns to use the rover over time. Only the results will be able to tell us how our ability to tele-operate rovers evolves during an analog mission.

– I truly love this experiment, it is so cool! Thank you for your time, it was really cool to hear about those two really interesting experiments!”

Narrative: All went quickly and nominally, no issues to remark.

Problems Encountered: all the images are black with the MLC telescope, I don’t understand why.

Images submitted with this report: one, taken with my camera on the ocular 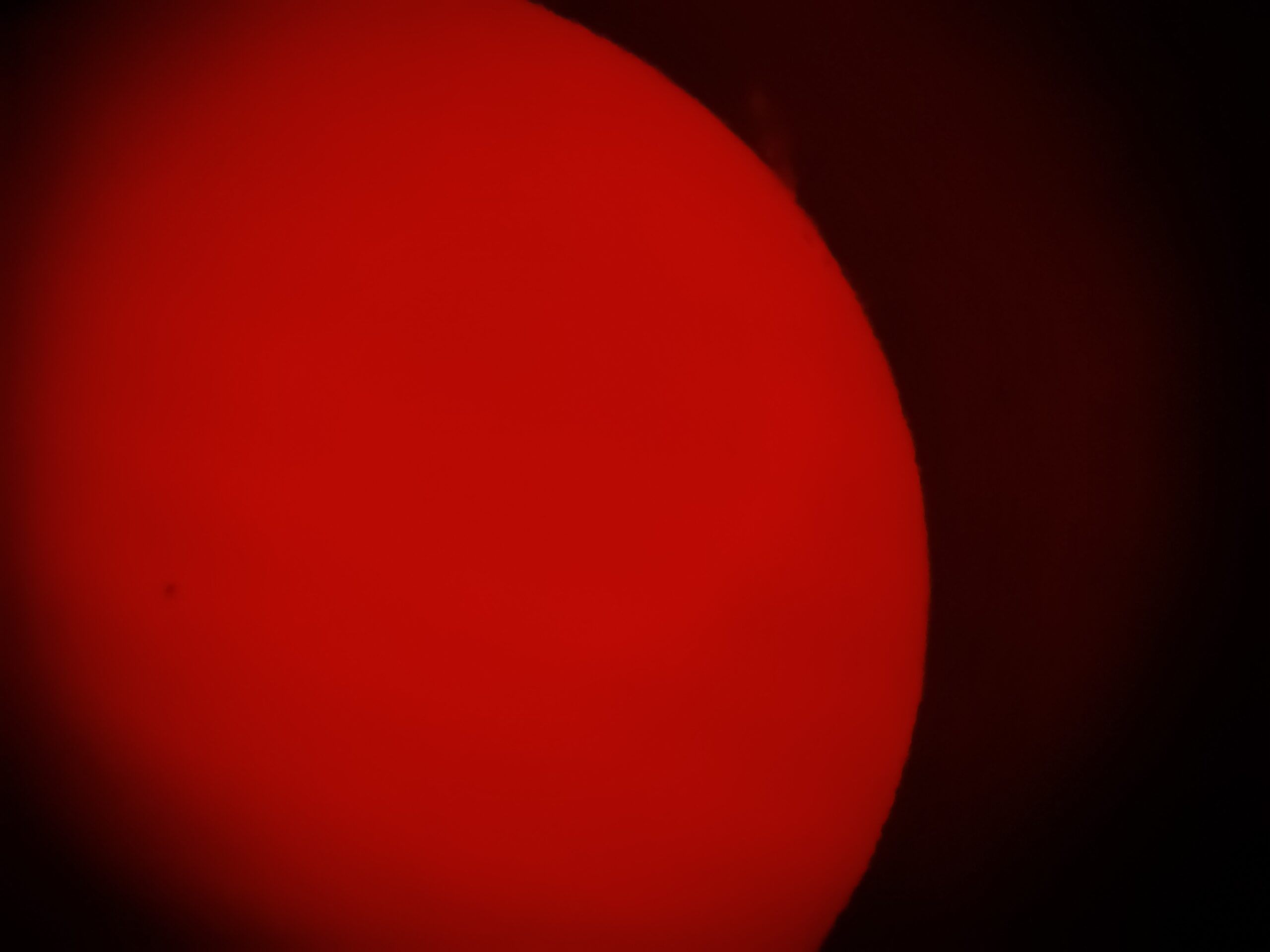 Static tank pipe heater (on or off): on

Static tank heater (On or off): on

Summary of health and safety issues: The 2 new headsets were received.

Sol Activity Summary: All of us slept in except myself, who woke up at 5am to take advantage of the night’s extra data to download data for Maxime’s remote astronomy observations. Fortunately for me, I went right back to sleep for a couple of hours. Unfortunately for Maxime, the literal gigabytes of data we’d accumulated were of no use, as the telescope had issues and only recorded noise. It was with great luck that he at least managed to catch a few images of the Sun during the day while the Musk telescope was pointed the right way.

Days are seldom fully idle however, and we still got a small routine EVA done for battery change, finally achieved or first 3D printed objects, and a part of the crew spent the afternoon doing questionnaires and tests for the work we do with two French universities. Nevertheless, it was still overall a fairly relaxing day, and we’re looking forward to pizza night for dinner.

Look Ahead Plan: Pizza night for dinner. (also, using the 3D printed piece for the water recycling and printing new pieces that we had in our backlog). Scheduling some remote astronomy observations that will hopefully function well.

Crew Physical Status: A crewmember had a fall in the stairs between lower and upper deck, and got away with some bruises and pain but nothing major, very fortunately.

EVA: One, very efficient, only to switch batteries on an atmospheric science instrument.