Summary:
Today I finally was able to observe the sun with the solar observatory! I observed the sun for a bit this morning and went after lunch too. Everything went smoothly and no problems were encountered with the lower shutter, although a bit of cleaning and lubrication can certainly help.

I sent you the image of the Sun I took this evening. With a nice prominence. My photoshop skills can certainly be improved but I’m quite proud of my first image anyway.

Images submitted with this report: None since yesterday’s observations came back with "WCS Registration failed" error.

Errors Encountered: WCS Registration failed -> probably due to bad weather over the observatory. Hopefully this evening will be nice. 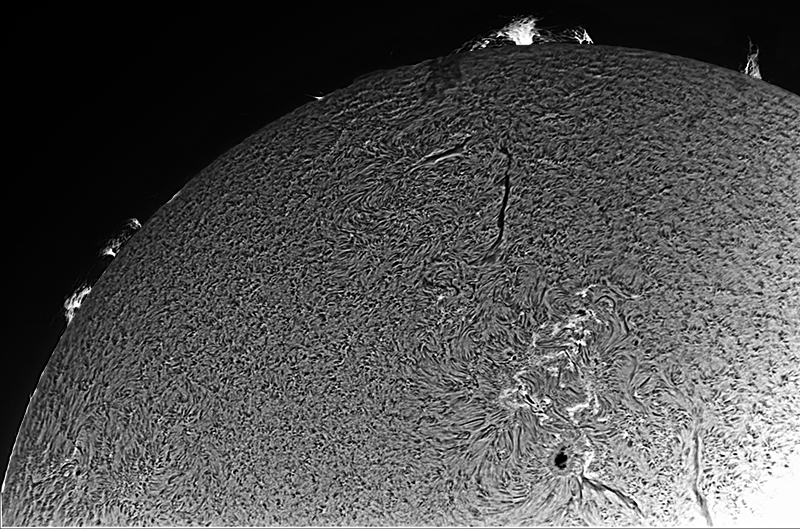 Non-nominal systems: Nothing to report

Spirit rover used: Not use

Opportunity rover used: Not use

Curiosity rover used: Not use

Perseverance rover used: Not use

General notes and comments: Nothing to report

Summary of Hab operations : Nothing to report

Static tank pipe heater (on or off): Off

Summary of suits and radios : We checked the voltage of the suits and it seems that the biggest problem comes from a charger which had a short circuit between – and +.

Also the battery of the 8 and the 10 seems to need a new battery because we don’t manage to fully charge them, we can charge in until 6Volts which seems to be too low to power the fans.

Summary of GreenHab operations: Nothing to ad since the past report

Summary of ScienceDome operations: Under the hood, we have some stuff that must remain sterile.

Summary of any observatory issues: Ignacio was able to use it for the first time, everything goes well.

Summary of health and safety issues: Nothing

Questions, concerns and requests to Mission Support: Nothing to add

Dear earthling, this is the Journalist Report from Sol 5 on Mars!

Last night before going to sleep Julie had a little scare! Julien, the clever one, put a creepy doll’s head in her room as a joke ! She turned on her lamp and jumped as Julien shouted : April fools!!!! Good old Juju. We start to feel what it implies to be alone but in correspondence with the Cape Comm to ensure us an optimal safety. Being far from everyone is sometimes synonymous with a very bad satellite connection and constrains us in our window of contact with you, our planet…

Today the sun brought us some good news, Ignacio was able to use the Musk Solar Observatory. We couldn’t hear each other anymore, he was so happy and enthusiastic to see our star. After breakfast, fortunately, he left faster than lightning!

So Ignacio, how does it feel to see the sun so close?
Ignacio : At first I knew it was the sun, I saw a red dot. I thought I was looking in the wrong place, but after a quick reflection and a better adjustment, TADAM the sun in all its splendor!

And what can you see on the sun?
Ignacio : Today I saw the chromosphere that corresponds to the "surface" of the sun and the prominence that are gases ejected into space. It’s quite incredible to be able to observe this live!

On our side, we took the time to clean the Hab and to do some stretching for some of us in order to stay in shape

This noon I had a surprise! Most of the team preferred the insect meal, an omelette ! Amazing, real pioneers!

This afternoon Julie also concocted a surprise for us, maybe to get back at Julien! A surgery battle that was not in our planning. The goal : to be in the stress of the unexpected. Julien against Cyril. However, despite the additional stress, both teams improved. I am happy to announce that none of the patients died! Youhouuuu ! Apparently Julien did better than Cyril but we won’t go into that because they are already arguing about who did better than the other. Ahh the boys and the competition…

We begin to enter in a small routine but every day is always different, we learn to tame our environment.

Everyone is doing well, it’s not today that a mutiny or a group problem could happen. We all love each other very much, how sweet ! I would still like to kick Ignacio if he starts snoring near my ear again it might be for tonight! I feel that if I do that I am going to be scolded by Julien because I risk disturbing the sleep of my room neighbor… Besides tonight we are hypnotized, I am excited to see Julien’s power!

Daily water usage for research and/or other purposes: N/A

Time(s) of watering for crops: N/A

Narrative: Nothing new in the GreenHab today. It was very hot in the afternoon, with temperatures reaching 116°F! I didn’t spend much time in it as it was very hot, but I still controlled the environmental parameters as the other previous days and water my plants. I took some pictures too, to keep track of my experiment.

Mission Status: Aborted EVA today due to lack of communication hits the crew’s morale. The free time was put into use to clean the HAB and scientific work.

Anomalies in work: None

Support Requested: None at this time

Our day started quite well with breakfast at 08h00 as usual. Julien analysed our sleep data, and we ate some porridge with dry bananas and dried raisins and some milk. This was quite good!

Between 9h00 and 12h00, we all worked on our personal experiments. Julie was preparing the match of the afternoon, Audrey prepared her antibiotics, Ignacio discovered the telescope, Jean did some analysis on his data, Cheyenne completed her excel to study the growing of her plants, Sirga wrote for her journalist report, Julien and I worked on the drone plan. Quite a busy morning!

At lunch, Sirga prepared 2 plates based on some eggs and chicken. In one of the plates, she added some mixed worms. The goal was to deduce in which plate they were added. As crazy as it could be, the one with the mixed worms had more success than the other one, it was tastier.

At 13h00, a part of the team started to prepare for the EVA of the day. Unfortunately, due to a bad satellite connection last night, we had bad communication with the capcom and we misunderstood the approval of the EVA request. The EVA was, in fact, not accepted. Therefore, we cancelled it at the last minute. I have to say that the team was very disappointed, but we are prepared for these types of unforeseen events.

Due to this cancelled EVA, we had to discuss all together to think back on our schedule so everyone will be able to achieve his/her experiment. We also spent some time looking at the damaged spacesuit. Actually, it was only the charger that was damaged. Therefore, the battery was not charged enough.

After this, around 16h00, we had a match for the experiment of Julie. This time, it was Julien (Team Anat) against me (Team Engineering). The two fractures were quite difficult but Julie said that we did a really good job! The winner is not yet known. Unfortunately, I think that Julien has a small advantage. We will see tonight!

Now, we are all writing our reports for the capcom window. I hope that the satellite connection will be better than yesterday. Indeed, it was quite difficult to communicate correctly with the capcom and to transfer some pictures.

Regarding the famous pizzas, they were quite good and it was good for the morale of the crew.

In regard to the station, everything seems nominal.

Finally, the morale of the team is still intact and motivated. Tonight, we will also play cards game since everyone enjoyed it last night.

Hope that tomorrow will be as sunny as today so that Ignacio will continue to perform amazing observations.