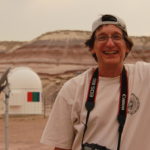 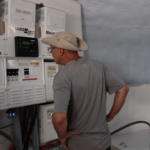 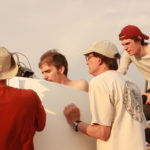 At 3:14 this morning I woke up to some brilliant moonlight dancing across the Martian terrain through some passing clouds. It was around this time that Shannon emailed back about the generator, but without Internet I wouldn’t be able to get her message until morning when power would be restored by the solar system.  I was up at sunrise and did some tai chi in the desert to start the day.  After organizing my stateroom and the hab, the power came on at 7:45 AM.

I received Shannon’s email regarding the power issues.  I checked the oil again now that the engine was cool, and it was fine.  The coolant level was also fine (needed only about a half cup).  I started the generator and let it run for about 15 minutes with no problem.  By this time the solar panels were up to 89%. See the section under “Problems” for specific details.  We thought the problem was solved and we were well on our way.  However, the solar system shut down again with a low battery warning while we were in town.  Switched to generator, the crew has showered, and we’ll see how we do with the generator tonight.

So other than working with power issues we were successful in getting the rebar pointed by Dave from Rabbitbush.  The rebar stakes will secure the weather station tripod.  However, we were not successful in getting them in the ground; too much rock.  We decided the best method would be to concrete the pole in the ground.  We talked with Dave who is arriving tomorrow to pour some concrete for our weather station pole. Dave is also going to look at the generator.  Gary and I dug a hole in the ground removing lots of rock to prepare for tomorrow.  It will be a simple job.  The Davis weather station is operational and we looked at data streaming through on the computer.  Tomorrow we make it permanent.

The Bloomsky all sky camera runs off a solar panel and takes a picture of the sky every 5 minutes which it uploads to the web and can be viewed through your smartphone.  Anyone who downloads the free app can see the sky condition at MDRS, get weather data and see some of the campus as well.  At least that’s the theory.  I could not get it to connect.  I checked it at home and successfully ran it there for quite some time.  I’m suspecting a power issue in the unit, but it’s not picking up the internet from either the hab or the observatory.  I also can’t get it to charge, although that wasn’t a problem when I arrived.  It did charge the first day.  At this point it is a low priority, but I hope to have some time to work with it again before we leave.

Jacob will be putting his images of life at MDRS on Google Drive.  I hope to add some astronomical shots as the skies clear.  And that will happen. Clear skies are scheduled for the weekend.  But for now…my resident meteorologists- yes I have two of them, are arguing about the merits of the evening for testing the observatory.  There seems to be a milkshake involved in a bet, but to be honest I really don’t know how it ended up. They were talking about percentages of how much clear sky will be here at dawn.  They both agreed that tonight is not going to be a good night in the early evening, at least not until midnight or later.  A storm did drop some rain, and the winds have picked up considerably.  As we approach 2200 hours it’s currently overcast and windy.  August 4th then will be the test to put the MDRS Robotic Observatory online.

Power Issues: Generator started fine.  Added only a half cup of coolant- doesn’t seem to be the problem. Oil level is fine.

For the solar system there is a fault light on the main panel.  Shannon was contacted about the situation. The three inverter panels all showed an F07 fault.  Jacob and I worked with Shannon throughout the midday assessing the problem and working a solution. It turns out the battery temperature was too high. After cooling down the batteries Shannon had me reset each inverter.  That seemed to do the trick.  We’re hoping this issue is resolved.  The fault light on the main panel may be indicative of the generator not being in auto mode.

The solar system power went out again around dinnertime while we were in town with no real load on the system.  The panel read LOW BATTERY. I turned on the generator, and we’ll see how well it does for the night.  It will be some good data for Dave tomorrow.

Bloomsky: the unit is not connecting to the Internet. It does not work with a 5G system, but we have both here.  We may have to abandon this all sky camera.

The five of us arrived in Hanksville around 3:30 PM.  We had an early dinner, since we didn’t want to go back to town once we reached MDRS. There is a lot of smoke in the sky, and the temperature is 100 degrees; it’s almost paradise, but I was hoping for some clear skies.

We arrived at the Mars hab and got things moved in fairly quickly. I got the swamp cooler working and we filled the tank upstairs with water.  Food items were stored, and I opened the observatory dome remotely.  Everything is working fine.  Adam Jones had the task of setting up the Davis Weather Station while I worked with the Bloomsky all sky camera.  Adam installed the weather software and got the unit to connect.  However the rebar stakes to anchor the pier into the ground are flat and not edged and so we couldn’t get them deep enough.  We’ll have to take them into town tomorrow to see if we can get them sharpened.  So we couldn’t finish the install and brought the weather station in for the night. The other Adam and Jacob are videographers and both of them were taking all sorts of shots.  I will say one thing.  The Astronomy Refit 2018 will be very well documented.

During all this the power went out.  The system is run by solar.  I checked the status and it showed that the batteries were at 77%. The system is supposed to shut off around there, but it was only on for 2 hours.

I turned on the generator and we were back in business.  We’ll, at least for about two hours until the generator shut off!  The large fuel drum showed slightly less than half a tank, no issue there.  Checked the oil and it was fine.  There was a little steam and the radiator was hot.  Out of coolant?  Too hot to open.  Sent an email out to MDRS apprising them of the situation, however with the internet down I doubt I’ll get a response until tomorrow.

So I gathered the Crew and explained the situation.  It’s getting dark, there are clouds and the winds are picking up.  There are snacks but no dinner.  No showers tonight either, and we’re going to sleep outside; too hot inside. Gary and Jacob are on cots.  The two Adams are on the ground.  And for myself… I’m in a hammock.

I lay here looking skyward seeing huge dark voids with a splattering of stars in odd arrangements.  Gary says he felt a drop of rain.  I’m not worried.  Mars is shining brightly through the haze, and that’s a good omen.  We had our snafu for this mission. Tomorrow is going to be an amazing day.