Narrative                  Today for the first time, since our arrival, we could see a real dense set of clouds covering the Martian sky, which was really nice for a change. We jumped right into our space suits after breakfast and were poised to explore Matryoshka site six for more geological probes for earth. Yesterday our rover Deimos, named after our Martian Moon, was pretty worn out in the end of our EVA. So we decided to give him a little rest today and took its brothers Spirit and Opportunity out for a ride.

Both rovers are still very young and therefore un-experienced. We have to take them out from time to time for their batteries to grow stronger. Our exploration site today was the notorious Lith Canyon, which is very far north, basically at the edge of the Martian landscape that is still accessible for us considering our technical capacity. If we would go even further, we might not contain the power to come back in time to survive.

So it was a considerate risk to take the new rovers, but you have to stretch the range of the possible to progress. Space travel is not about always playing the save cards, it’s about to expand the borders of what mankind can achieve. And talking about the current limitations makes me refer to yesterdays evening. We opened a care package from earth with space food from Roskosmos, the Russian Space Agency. We got meat and cheese in tubes, which was quite alright, but there is definitely still room for culinary improvement. But as I am speaking Russian it was fun to get deep into the ingredients and share it with my fellow crewmembers.

We reached Lith Canyon pretty directly with no real detour. There are somewhat natural roads on Mars, shaped by wind and erosion. From experience we do not test our rovers to the extreme and keep them mainly on flat surfaces. That means, that we have to walk quite long distances through rough terrain. These longs walks on the other hand create other problems, but I will come to that in a little while.

The clouds over Lith canyon welcomed today’s EVA crew, consisting of First Officer Randazzo and Crew Engineer Hunt, in dramatic fashion and we found our designated sample sites very easily. The rocks, that were lined up on the walls of the Mountains looked like thin brittle plates, that were sprinkled over a desert. Almost like slate slabs made from very dense and compressed sand, very impressive.

But you have to remain very alert. When we walked closer to edge of the area we could look very deep into the maw of the canyon. You really have to watch your feet so you don’t accidently step on a sandy slab, which cracks and makes you slide. We always kept enough distance to the edge and backed one another up.

For Randazzo and Hunt it was actually the last EVA for a long time. They will be needed for other duties in the weeks to come. So there was a certain melancholy lingering in the air, complimented by the cover of clouds. We decided to shoot a remote control picture to commemorate the moment. And for the fact, that it was almost shot blindly from the ground it turned out brilliant.

So we finished our daily mission and headed back to the rovers. I was always a little bit behind, because the sun breaking through the net of clouds captivated me for additional shot. My sight was a bit blurred from my heavy breath, caused by the intensity of hiking up and down the canyon. I was lost for a brief moment, but reunited with the crew through radio communication.

But we all were disoriented and didn’t recall the position of our vehicles. Because of the rather long walk and the time we had spent in the canyon we couldn’t remember were we came from. So we chose the tallest crewmember around to go to a lookout to help us, who was obviously Crew Engineer Hunt. Did I mention, that we nicknamed him Big Foot? Now you know why!

Big Foot proved his value once again and got visual of our rovers. The sun was standing already low and we really had to hit the pedal to get to the hab before nightfall. Our young rovers contained their energy at a surprising high level. So it was quite a steep learning curve for the team and our vehicles, and the risk to take them out was proven justified. Another day on Mars has almost passed and we are all a bit wiser than before. Thank you for that dear red planet.

Personal Logbook             It was a great day on Mars with new visual impressions and experiences. The days now become shorter for us and the nights longer. As I am dependant on light I can not work us much as I want. I have to use my remaining time wisely to receive the results, that I want to achieve.

The group definitely grows closer together and knows one another inside out. I wonder how the dynamic of the entity that is crew 184 will develop in the future. For the time being we are happy for the time, that we can spend together. 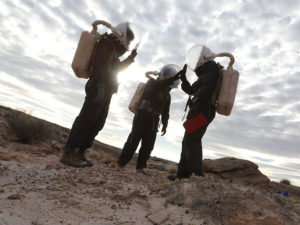