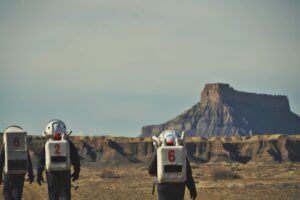 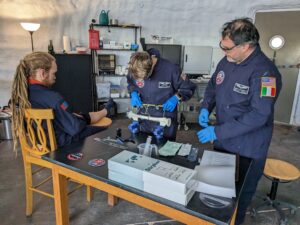 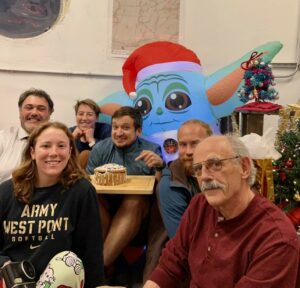 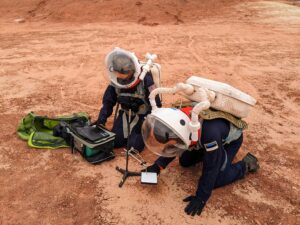 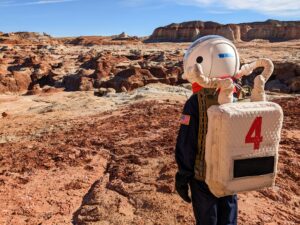 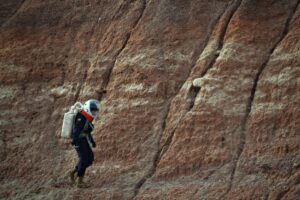 MDRS 271 was a Mars Society crew, self-named I.M.A.R.S. (International Mars Analog Research Simulation), was comprised of a diverse group of individuals representing four countries, providing an international flavor to the mission. Three members were veterans of past MDRS missions, while three were MDRS rookies. The crew’s priorities were to maintain all MDRS facilities, vehicles, and equipment in a safe and operable condition and to complete geological, astronomical, psychological, medical, and operational projects.

Prior to the mission, the crew met for 10 video sessions to organize and prepare themselves for their stay at MDRS. These meetings provided an orientation to the station, expectations for accommodations and living conditions, additional simulation protocols beyond those outlined in the MDRS Handbook, and expedition behavior characteristics derived from several sources. For a crew assembled from individual applications, the latter topic was vitally important to establish a cohesive and cooperative effort immediately upon arrival at MDRS. As was proven during the commander’s two previous missions, this set of expedition behaviors allowed this crew to work and live together and support each other extremely well throughout the duration of this mission. This also assisted in the completion of all planned projects and for achieving the safe and effective operation of the station that had been established as priorities for the mission. From this commander’s perspective, I could have not asked for a better crew.

A brief summary of crew project accomplishments follows, with a full description found in the Crew 271 End of Mission Science and Operations Report.

The data gathering for the projects well very well – the members of Crew 271 patiently filled in my surveys, and there seemed to be no missing data points. While there weren’t too many overtly observable coping strategies or team challenge resolution mechanisms executed, there were some instances that were noted for further analysis. Due to the individual profiles of the Crew 271 members and the overall resemblance to a potential real long-duration space exploration team (i.e., culturally and professionally diverse crew very interested in human spaceflight), the data are good, and the sample has high validity. While unable to access all the data collected from surveys and journals, I’m quite hopeful and optimistic regarding the potential findings and conclusions from the studies.

The goal for this particular experiment was to observe the drying trends of a clay-rich surface for a longer period of time following controlled wetting of the surface to understand chemically bound water trends better. This contributes to the overall understanding of how water may be retained, persevered, and detected on Mars. A location was selected north of the Hab for an experiment to measure drying trends of a clay-rich and Mars-like surface over the course of the MDRS mission. The initial wetting of the experiment was conducted on Sol 4, and the immediate drying trends were measured for an additional two hours following saturation of the surface on this first EVA using an ASD FieldSpec3. Return EVAs were conducted on Sol 5, Sol 6, and Sol 9 for an additional two measurements each day. On the last day of measurement, a dry sample was collected from a nearby site to get initial water content and an additional sample was collected from the experiment site, which still appeared damper than its surroundings. The two samples collected were returned to the Science Dome for loss on ignition analysis. The spectral data was post processed and will be plotted and analyzed to be used to supplement the findings of prior field campaigns. This work is in preparation for publication in the late spring 2023.

Three long-distance EVAs collected samples in the area of Barrainca Butte (black vesicular igneous rocks, conglomerates, and light-colored mudstone), Candor Chasma (Summerville formation: red mudstone and sandstone with cross-cutting gypsum veins), and Skyline Rim (Dakota conglomeratic sandstone and Mancos Shale samples). Samples were weighted and processed in the oven in the Science Dome, then weighted again to ascertain water content. The samples will be shipped to Purdue University for further spectroscopic analysis to identify geotechnical properties for ISRU via remote sensing. In particular, spectra will be studied for indicators of water content and bulk size.

Robotic Observatory: After adjusting the MDRS-14 telescope, multiple observations were taken when the sky was clear. The most notable was M42 (Orion Nebula). Other objects that were sampled are M1 (Crab Nebula), M3, M31 (Andromeda Galaxy), M97, M101 (Pinwheel Nebula), Rosette Nebula, Barnard 33 (Horsehead Nebula). The Astronomy Support will work further on the telescope focus.

Musk Observatory: The sky was hazy or cloudy on most sols. One observation of the Sun was performed towards the end of the mission. This allowed the whole crew to participate in a solar observation. One photo of a group of sunspots with visible umbrae and penumbrae was captured and processed.

The purpose of this project was to verify whether Martian analog crew members could use an offline, self-assessed module, and locally reproducible 3D printed bone simulation models to become confident and competent in performing external fixation procedures to manage open tibial fractures in an austere environment without access to specialist support from Mission Control. The first two days were spent having participants take a pre-learning confidence survey and complete the training materials and video. Over the next four days, each participant successfully completed a skills test, achieving a go ahead on each competence objective and verifying their work with self-assessment photos. Afterwards, each participant completed a post-learning survey and received Medical Makers certificate and memorabilia to commemorate their accomplishment. These results suggest that my hypothesis was correct: the Tibial Fracture Fixation Training Module can provide analog space crew members with the confidence and competence necessary to teach themselves a new surgical skill. I will be submitting an abstract to present this research at the West African College of Surgeons Conference in Togo this spring, and I am working on an article to submit to Aerospace Medicine and Human Performance journal.

During Crew 271 all 11 EVA suits were inspected for their power systems, and especially wiring connections, charging hardware, and rechargeable batteries. Issues were identified, changes were made to equipment, and recommendations made for better suit maintenance by future crews. A second project evaluated MDRS power consumption at the request of Mission Support by evaluating active station electrical devices. A spreadsheet of the station components and power consumption was created and sent to Mission Support.

A maintenance check was conducted on the new MDRS radio repeater, and its antenna was raised to improve reception between the Hab and EVA teams, since communication gaps were discovered by crews this season. Communications checks during Crew 271 validated this problem, and a recommendation is made to relocate the repeater to the North Ridge. It is also recommended to re-establish Communications Officer duties on each MDRS crew, with those duties most likely assigned to the Crew Engineer to insure proper radio usage and battery recharging.

The I.M.A.R.S. crew would like to extend its appreciation to Dr. Robert Zubrin and Dr. Shannon Rupert for the opportunity to participate in a mission at MDRS and hope that we performed in a manner befitting the safe and effective operation of the station while contributing to the long term goal of human exploration and colonization of Mars.