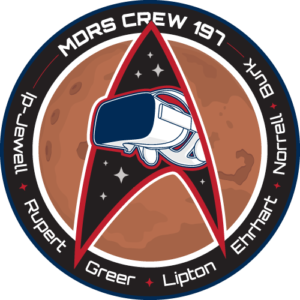 Crew 197 grew out of the successful May 2018 Kickstarter campaign for the MarsVR Program Phase 1.  The Mars Society ran a successful crowdsourced fundraising campaign which included offering paid seats at the MDRS as a reward level for the first time.  Two key supporters of the MarsVR Kickstarter purchased seats, and were offered slots on this crew.  The Program Manager and Director of Engineering for MarsVR organized the mission logistics and the overall crew activities.  Other additions to the crew included our Commander, Crew Journalist and two members of the NorCal chapter who had just delivered the upgraded and refitted analog spacesuits to the MDRS for the new field season. This was not a science-focused mission — rather it was a VR and spacesuit engineering focused mission, but we approached it in the same way. 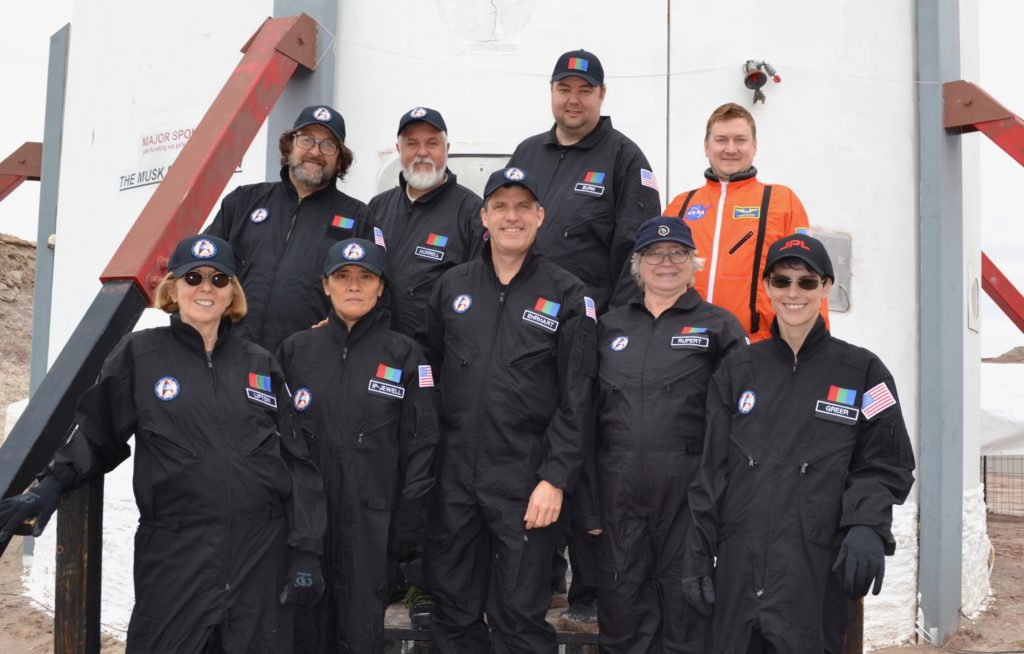 Crew 197 successfully ran our sim focused on VR location scouting for MarsVR Phase 2, and testing / feedback of the recently refurbished analog space suits.  Our mission focused on gathering important data for both of these projects.  A secondary but important objective was to capture high quality photo, video, 360, and drone footage of the MDRS and crews on EVA.  This footage will be used for promotional purposes by the Mars Society.

Our team was comprised mostly of rookies.  Only Dr. Ip-Jewell and Dr. Rupert had prior experience in sim at the MDRS.  As a result, we struggled to learn all of the ins-and-outs of running a sim, going on EVA, and closely following all of the program rules.  Towards the end of our rotation, we felt we hit stride and were able to accomplish several advanced activities with a minimum of mistakes.  Our team gelled very well and our culture as a team was an important part of our time at the MDRS.  We all share a passion for space and for helping the Mars analog research program, and that helped us to bond quickly and assist each other well with tasks outside our immediate area of expertise.

Crew 197 arrived at the MDRS just after a major weather front had moved through the area, and the terrain was still recovering.  It had been quite muddy prior to our rotation and also during the afternoon of Sol 1, there was another rainstorm which drenched the area.  As a result, we were not able to go on EVAs until Sol 3.  Our original plan was for a 72 hour sim, stretching from the evening of Sol 1 through the evening of Sol 4.  Because of the poor terrain and other factors, we ended up running the sim from the morning of Sol 2 through the morning of Sol 5.

5 of us arrived in Grand Junction and spend a couple hours searching for Susan’s luggage (her luggage was on a different bus than her), then we acquired a refrigerator for the Hab and successfully mounted it along with supplies and luggage to the roof of our rental Nissan Pathfinder using a complex and well-engineered system of bungees and nylon rope.  We felt this was our first Martian engineering challenge that we successfully overcame with teamwork and a “can-do” attitude.

We repaired the tunnels, mopped the floors, moved and organized equipment to prepare for our sim.  Two of us also drove the Hab car to a remote location for repairs.  Then we conducted an extensive training session/discussion with Dr. Rupert.  Also, Robert McBrayer installed padding on the new Hab stairs (which had pointy metal features) to help our bare feet!

We started the day with yoga and tai chi (something that became a morning tradition for our short crew rotation), then we went into Sim and talked about what we all hoped to get out of our mission.  We did a suit training session where we all tried on the suits but due to the weather did not get to go out on our planned initial EVA to Pooh’s Corner.  We also did a CPR exercise led by Susan Ip-Jewell where we all tried out a CPR technique.

Our first increment of the Pooh’s Corner EVA was achieved quickly by James B., Max, Shannon N., and Jim E.  Because we had over 45 mins left, we decided to take out a couple rovers to scout the first VR location, but quickly learned the importance of filing EVA plans in advance and to “Think like a Martian, Act like a Martian” by not taking on additional unnecessary risk.  Our afternoon 2nd increment of Pooh’s Corner with the remaining crew was successful and Max gathered feedback from everybody on the suits and their experiences.

This was by far the most productive day of the sim.  We went on two long EVAs, scouting the trail to Candor Chasma and Lith Canyon/Burpee.  We learned a lot about GPS coordinates and how to take readings from devices, but also the differences between GPS decimal, hours/mins/secs, and the UTM NAD27 CONUS coordinates that are used at MDRS.  We also learned about the rovers and their gears and how fast the batteries are draining when they are not in the correct gear!

We extended our sim a half day to accomplish an additional EVA to Candor Chasma/The Summerville.  We acquired a large amount of photos, videos, and 360 footage there.  Afterwards we ended sim and prepared the Hab for the next crew.

Evaluation of Results of Team Goals

Not Achieved. We were not able to work on this at all during the rotation.  However, we did gather lots of knowledge and information about how MDRS crew members are typically trained, and we will be doing follow up work to finalize the Phase 1 training scenarios as part of the final release of Phase 1, after the public Beta.

Partially Achieved. We successful articulated the entire spacesuit donning/duffing procedures and the airlock procedures, which are currently being implemented in the MarsVR Phase 1 codebase.  Additional conversations and enumeration of the steps of training procedures for the GreenHab, Kitchen, and other Phase 1 scenarios still need to be accomplished.

Not Achieved. Because the IKEA cabinetry was not yet installed prior to our rotation, we were not able to accomplish any of the updated interior scans we intended.  As a result, we did not arrange to have the LIDAR unit delivered during Sol 2, as was the original plan.  In addition, the tunnels were not fully repaired prior to or during our rotation, so we were unable to rescan them.  Because of the weather and other factors, we were not able to go on a scouting mission (in sim or out of sim) with Dr. Rupert to acquire scans of dinosaur fossils or any other notable landmarks.

Achieved. Our crew acquired an extensive set of photos, videos, 360 panoramas, 360 video, and drone-based overflight videos of the MDRS and the surrounding terrain.  James Burk, Shannon Norrell, Jim Ehrhart, Sacha Greer, Marge Lipton, and Robert McBrayer all contributed high quality assets to our crew’s library of these, which are in the process of being uploaded to Dropbox and put into use by the Mars Society’s Public Relations staff.

Partially Achieved.  Our crew helped with: Hab cleanup; water acquisition and transport; Hab car repairs; acquisition, transport, and installation of a new upper deck refrigerator; repairing and covering of the tunnels; installation and testing of the HAL system to mitigate the low bandwidth environment; testing and minor repairs to the analog spacesuits and their chargers; and testing out all Hab equipment.  We were not able to complete the tunnel repairs but we did drive in new stakes and cover/zip-tie most existing tunnels.  We offered to test & validate some of the damaged batteries in the Science Dome but it was decided not to save any of those.

Achieved. Because we were unable to perform interior scans, Burk and Norrell decided to focus their main efforts on scouting EVA locations for future terrain scans during Phase 2 of MarsVR.  Working with Dr. Rupert, we identified several interesting regions surrounding the MDRS such as Candor Chasma, the Summerville, Lith Canyon, and Barainca Butte that we scouted and acquired imagery of, both during in-sim EVAs and out of sim.

We did not achieve our original objectives of the mission, but we felt we did accomplish a lot by successfully running a 72 hour sim with no significant problems (ie, nobody “died”, we never had to break sim, and we successfully maintained all the Hab equipment.).  In addition, we gathered important data for the VR location scouting and usage and feedback of the refurbished analog spacesuits.

Crew 197 had a positive experience at the MDRS which we will take with us for the rest of our lives.  We’d like to thank our families and the Mars Society for making this mission possible.