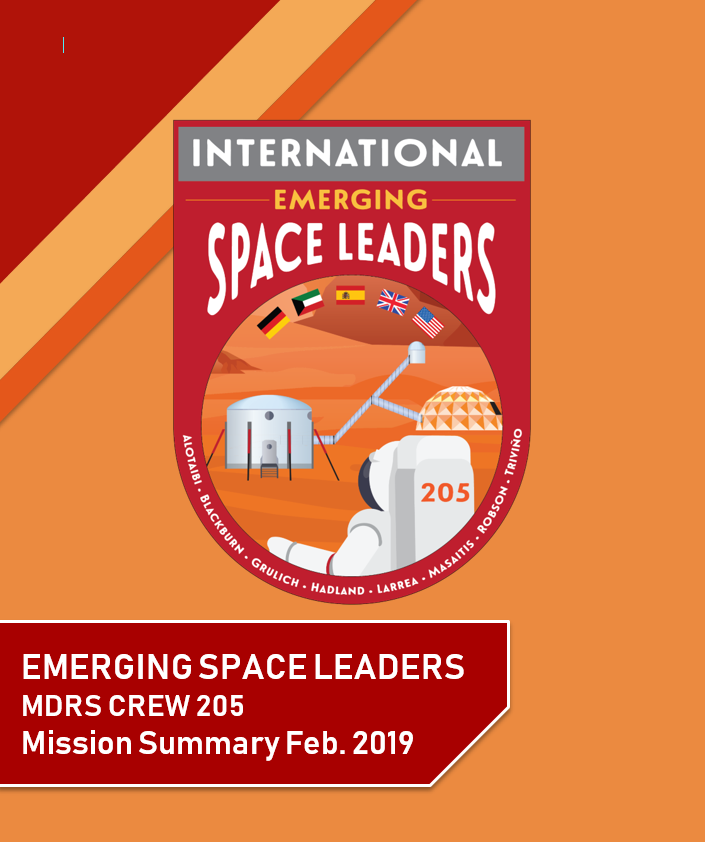 Establishing a human presence on Mars is increasingly seen by space agencies and private organizations as the horizon frontier in human space exploration. These long-duration mission impose a high degree of technological, operational, physical and psychological challenges. Mars analog habitats, such as the Mars Desert Research Station (MDRS) in Utah (U.S.) are established to conduct field experiments, test new hardware, new operational concepts and study the social and crew teamwork dynamics in support to these future manned missions to the Red Planet. The International Emerging Space Leaders (IESLs) Crew (or MDRS Crew 205) was composed of eight international young professionals and students, who together undertook a Mars analog mission from February 9th to 24th at the MDRS. The IESL’s Crew was an interdisciplinary team including members from Kuwait, Spain, Germany, the U.K. and the U.S. During the two-week rotation, the crew conducted multiple research projects in support of future analog and space manned missions. A key goal of the IESL crew was to identify key aspects for successful leadership in future space missions. As a case study, the crew rotated command roles during the mission, evaluating each other’s leadership performance during the mission. The team conducted multiple additional research projects relevant to space exploration in areas such as in-situ resource utilization, astronomy, geology, EVA optimization, and science outreach. This mission aimed at contributing to a better understanding of the requirements, benefits and challenges of international teams in future manned missions. 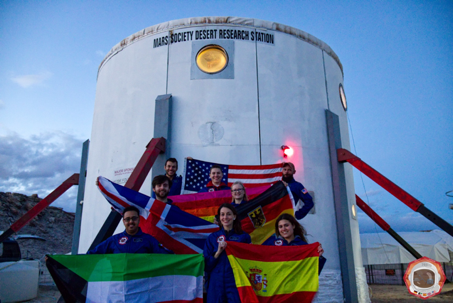 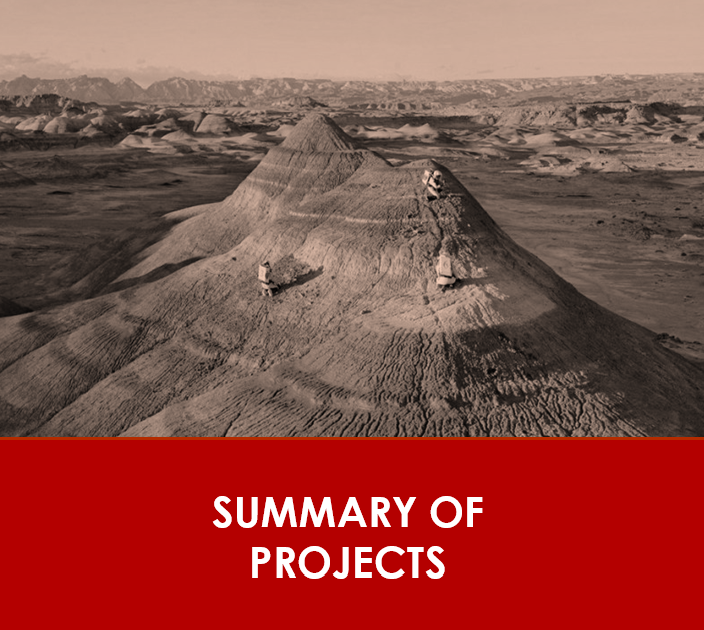 The data derived from the study will be combined and analyzed after the mission. The results will be summarized in a white paper to be submitted to the Mars Society.

In situ resource utilization (ISRU) strategies on Mars include the use of local regolith for plant growth. Regolith samples collected on the surface of Mars will not be uniform and consequently must be benchtop tested to determine their composition and properties by astronauts on Mars before being used for large scale food production. The purpose of this study was to investigate the viability of regolith collected around MDRS to support the growth of the model plant Arabidopsis thaliana.

Samples 2 and 3 emerged as the more viable substrates to support the growth of A. thaliana. Sample 2 is composed of an opaque dark material interspersed with quartz particles and becomes clay-like upon contact with water. Sample 3 is composed of similar particles with a larger mosaic of sand. Although it is not apparently clear from their geological properties, their success as a growth substrate was likely due to their wettability (quantitative ability to retain water), larger average particle size, and relatively neutral pH as compared to the more acidic samples 1, 5, and 6. Drastic variations in pH can cause nutrients provided to the plants using Hoagland’s to precipitate out of solution. To make food production on Mars feasible and sustainable, baseline tests like these are necessary in order to determine the suitability of substrates.

The primary goal of the astronomy project was to observe 3 different variable stars and perform photometry on them. The stars were selected from the American Association of Variable Stars Association Notices numbers 632 and 645. Their apparent magnitude was found to be suitable for the MDRS-14 observatory. The following table shows more information about the selected targets:

In addition to the above planned targets and the proposed photometry work, it was planned to capture astrophotography images using the MDRS – WF observatory. The main challenge was the weather conditions with the second week fully or partially cloudy. Three targets were requested for observation, and an image for one target was taken by the MDRS-14 observatory. The following table summarizes the reports and observations submitted:

As shown in the table above, the only completed observation request was for SY MON. 4 photometry measurements were performed for SY MON as per the following table. The Magnitude Value of 14.132 was submitted for the AAVSO website.

Drone for lighthouse: The drone flew stably at altitudes below 6m, while carrying neon tape weighted with washers. Unfortunately, the neon tape acted as a kite and pulled the drone off-course. An alternate source of visibility could be used for this proof of concept to be more viable. In tests performed inside MDRS, the drone lifted a sizeable glow stick. If a stronger drone with a brighter, heavier glow stick attachment system could be flown and survive higher winds stably, then the method could be implemented successfully.

Drone for pre-scouting:   The drone flew successfully at altitudes below 10m on flat areas near MDRS and on top of Kissing Camel Ridge East. Photos were captured over target areas of an appreciable area better than could be visualized by a human on the ground or by satellites. These photos could be uploaded to a laptop in the field. Use of a scale marker (3 m of neon tape) allows the images to be used for accurate mapping. However, the ground often appeared too bright, meaning smaller features were hard to resolve. With an improved camera and a drone capable of flying stably to higher altitudes, this could be a viable tool for mapping landscapes around an EVA crew.

Laser Rangefinder: The laser rangefinder was used in the field and tagged distant and difficult to outline objects such as cliffs, ridges and the MDRS base. However due to the dimensions of the EVA helmet visor, it was difficult to see through the viewfinder. If the device could be mechanically incorporated into or onto the helmet visor with a more ergonomic operating procedure, then the tool could be a useful planetary exploration tool.

Analysis of the first few EVAs conducted by crew 205 during their rotation at MDRS showed that the success of an extravehicular activity (EVA) depends highly on both the EVA crew and Support crew being aware of planned objectives and intended routes. This means that both parties should conduct EVA planning together, in order to understand what should be accomplished and what hazards could impact EVA outcomes. Pre-and-post-EVA checklists and SOPs were created to allow crews going on EVA to expose deficiencies in both the planning and execution. This allows team members to improve the process of preparing for an EVA, leading to more effective and safe EVAs. The Post-EVA Debrief checklist in particular will (when utilized by successive crews of planetary analog sites) expose complacency and help leaders to conclude which issues are impeding objectives from being accomplished.

Conducting a mission at MDRS requires adequate and effective planning and execution of all steps in the mission. During their rotation in February of 2019, Crew 205 developed a series of procedures and checklists to improve crew efficacy, and generate more operational continuity from future crews. This began from the moment Crew 205 conducted handover training with Crew 204, and concluded with crew revisions after the cessation of extravehicular activities (EVAs). These procedures focused primarily on points of performance for EVAs, unique tasks for Crew Engineers, Health & Safety Officers (HSOs), and element leaders, and critical tasks for crew members who are supporting EVA operations from the Habitat campus. These comprehensive checklists and procedures carefully outline specific tasks regarding Pre-and-Post-EVA checks for leaders and support teams, an HSO Medical Quick Reference Card, an Engineering and Maintenance task sheet, and rotating module inventories.

The focus of our outreach project is to Inform, inspire and Involve. We Inform using videos explaining information about the life and MDRS and about Mars using a small puppet called “Gus”. Gus is featured as each crew member who are explaining their tasks and research that they are conducting. The videos are short and kids friendly, easy to understand and will be shared on YouTube and Facebook.

A question and answer session was organized on Facebook to involve all followers in the mission.  We Inspire as we gave kids the ability to send us their pictures and we did a photo on EVAs. The crew members took several outreach pictures and daily updates were posted on social media platforms.

Furthermore, crew members will go back to their institutions to give talks about their experience in MDRS. We Involve everyone sharing all our pictures and videos to make them available for the public. We used several networks that are listed at the beginning of this mission summary.

Crew members took pictures and videos throughout the mission. The best photos were sent to our social media channels. Videos for the Youtube channel were recorded throughout the. The talks and visits to high schools and universities will be done when we return from Mars. 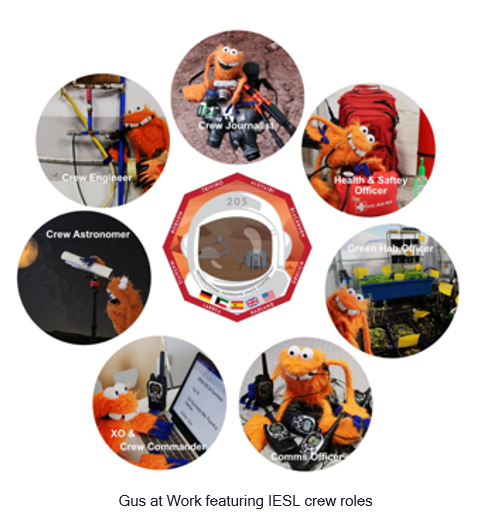 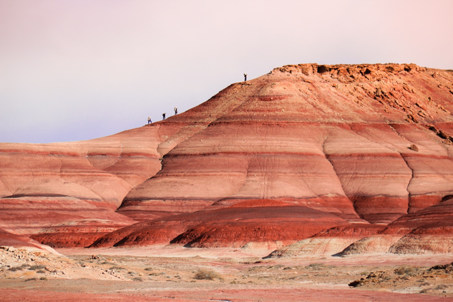