One solar flare was discovered today, aimed right at us. It is a whitish spot next to a filament, as shown in the photo attached.

No sunspots or prominences could be spotted with the Skyris camera, despite using the tuners. 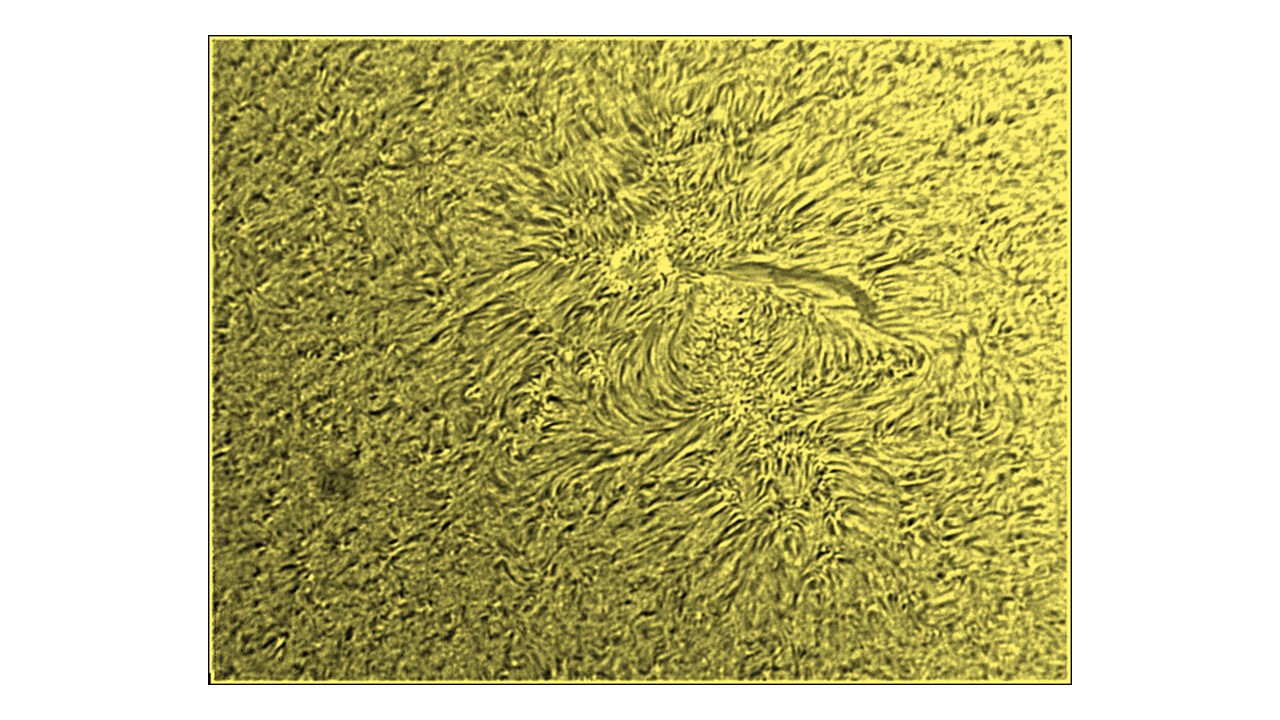 1. Emergency EVAC EVA: No locations were scouted during the EVA today. Emergency triage procedures were practiced so that a crew member might be safely transported to an evacuation location in the event of an incident.

2. Sunspot and Solar Flare Monitoring: Our CGA continued his task of monitoring the sun for sunspot activity. He found a solar flare in the direction of our planet and immediately alerted mission control to the danger.

4. GPS Route Measurements: No measurements today, as the EVA was at the hab location.

5. Waterless dish cleaning: Samples were taken from a dirty dish and a dirty dish that had been put under the UV light. There are minimal signs of bacterial growth from the first set of samples. It may take a couple more days to see signs of growth. Both sets of samples are now in the incubator in the hab.

6. The MAG (Maximum Absorbency Garment) utilization study: No progress today. Possible that the continuation of this study from Crew 192 will be scrapped.

7. Spacesuit Helmet Fogging: Neither crew experienced fogging of the masks today. Both crews used a defogging spray and non-scratch cloth on the masks prior to their EVAs today.

8. Crew Comfort, Health and Safety on EVA: Measurements of the crew’s weight, blood pressure, SpO2 and pulse were taken before and after the EVA. Analysis will be done as the mission continues.

It’s been a tale of two Sols over the last 48 hours for MDRS Crew 193. Sol 4 was packed with two extensive exploration EVAs, a delicious meal and a hard fought battle at the card table.

On Sol 4, Team Canada (EVA Team 1) left the vast expanses of the Martian desert to explore the moon. The soft, powdery, grey dirt enabled the team to travel vast distances and climb tall mountains with the ease of Alan Shepard hitting a golf ball in 1/6 gravity. They walked over 9 kilometres (5.5 miles for our imperial friends) and documented the unique landscape with their strong photographic skills. EVA Team 2 explored deep into Candor Chasma and marveled at the beauty of the valley. Unfortunately, due to a framing error, the breathtaking pictures that were anticipated did not turn out.

In the evening, the crew astronomer/geologist introduced his colleagues to a card game called “Shanghai”. The rest of the crew is figuring out the rules as they play, but they are beginning to wonder if the astronomer is trying to hustle them for extra dessert rations!

Sol 5 was supposed to be a relaxing day for crew bonding and skill building. However, things to not always go as planned! The day began with training on emergency triage procedures. This would enable the crew to care for their colleagues should an accident occur on an EVA. The newly learned techniques were then practiced during an EVA outside of the hab.

Two teams practiced triaging patients and moving unconscious astronauts into safer positions when they are trapped in an EVA vehicle. Unexpectedly, these skills were put into immediate real usage as one crew member reported they were feeling dizzy during the EVA. The other crew members responded immediately and brought the crew member safely inside the hab for treatment. We are happy to report the crew member is doing well and that the training their teammates received this morning enabled them to act quickly and decisively to avoid further issues.

The afternoon was spent recuperating, working on projects and furthering our research. It was not exactly the day the crew had planned; however, it showed the strength and adaptability of the crew to deal with issues as they arise.

A quiet evening of eating good food and watching a movie is anticipated. Perhaps the cards will also be broken out again…

Environmental control: Ambient with door open but only for few hours in the afternoon
Shade cloth: on
Fan: not used today

Hours of supplemental light: None

Changes to crops: None

Changes to research plants: No.

Notes on non-nominal systems: A sim-suit charging cable broke yesterday, due to having cold solder joints. I attempted to repair, but the soldering Iron broke after heating briefly.

Solar— SOC 22 % (Before generator is run at night)

Trailer to Static Pump used – no

General notes and comments: Eric made progress troubleshooting the beartooth devices by communicating with the manufacturer. The issue has not been resolved yet. Last night we waited too long to turn on the generator, SoC had dropped to 22%. This morning, it was only 26% after the generator running all night. It appears that the generator is not charging the batteries at all. SoC returned to 100% after a few hours of full sunlight. Mission Control (Shannon) is investigating further.

Summary of internet: We’re out, same as normal.
Summary of suits and radios: One piece suits nominal, still work to do on two piece suits. I changed some settings on radios we use during EVA (whisper function) to make the microphone more sensitive. Recieved new radios, opened one set. They are ready to use on EVAs. Demoted some older EVA radios to science dome, retired one radio from science dome and one from the green hab (both radios have issues).

Summary of Hab operations: Started sorting tools in toolbox, and radios/chargers. Went out and checked water tank, confirmed we are half way through it.

Summary of health and safety issues: During a local EVA to practice medical emergencies, we had one crewmember suffer from heat exhaustion. EVA was cut short, crewmember is feeling better.

Summary Title: All Aboard the Sooooollllll-Train

Sol Activity Summary: Today we planned for a shorter set of EVAs in anticipation of the hot day and gusting winds, concentrating on medical skills and simulation (see below). For lunch, we feasted on a delicious Martian lunch of Jamabalaya rice, broccoli and cheese soup, and fish. The afternoon was then spent on testing new radios and equipment, ongoing science experiments, finishing the MDRS sign, and usual Hab operations. Notably, our crew astronomer did a stellar job of picking up a solar flare, leading to the declaration of a state of emergency from the ensuing radiation storm, and reinforcing the good work we are doing scouting and mapping potential emergency shelters while on EVA. The remainder of the day was spend planning out our remaining week on Mars.

Look Ahead Plan: Tomorrow will be a mandatory rest day with no EVAs planned in anticipation of the 30C high. We will plan out the rest of our time here at MDRS, including a school visit on Sol 11, May the 4th on Sol 12, and end-of-rotation operations on Sol 13.

1. Paintbrushes were not small enough for lettering on MDRS sign.
2. Soldering iron is broken.

Weather: Clear skies in AM, extremely hot by mid-day.

EVA: The crew spent the morning going over principles of wilderness medical triage, evacuation and critical decision-making in case of accident while on EVA. We then moved these skills outside in our spacesuits, simulating various medical emergencies, including extraction from a rolled ATV while maintaining C-spine precautions (easier said than done in a spacesuit!). Our second EVA was cut short due to heat exhaustion in one crew member.

Reports to be filed:
GreenHab
Photo & Photo of the Day Report